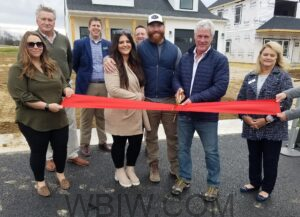 WASHINGTON – A $12 million housing project featuring townhomes and single-family homes now has homes built and sales in progress in the city of Washington, marking the third major housing project begun in 2022.

Both projects are located in east Washington, close to other new developments underway by Kerstiens Development, Simplified Developments, and other builders. The new Buffalo Trace and Villas at Eagle’s Point developments on 100 East will “foster significant density of new workforce housing in the city,” said Bryant Niehoff, executive director of the Daviess County Economic Development Corporation. “Having a variety of housing products available at different price points is vital to growing our community.”

City officials and economic development executives came together for a formal ribbon-cutting of the Buffalo Trace development on November 29.

“Beginning with the Simplified Developments project starting over the summer, we now have more than $37 million in new housing under construction, which will produce more than 290 new apartments, single-family homes, condos, and townhomes soon to be available in the city,” Niehoff continued. “We also have a number of other housing projects underway or being considered, so we have a robust housing trend underway here in Daviess County.”

The Washington City Council is supporting the project with a tax abatement for the multi-housing townhouses. “We appreciate the support and leadership of the city and the Daviess County Economic Development Corporation for this project,” said Steimel.

“As demonstrated by the ROI Indiana Uplands housing study, high-quality housing represents a critical element to help retain current workers for our established and growing businesses and attract future workforce for developments like what will be taking place at the $84 million WestGateOne microelectronics and semiconductor facility,” Niehoff said.

“It’s exciting and encouraging to see the foundation for sustained current and future growth be laid through housing projects like this,” said Mayor David Rhoads of Washington. “These developments will support existing businesses, as well as help our outreach to attract new companies to the city and region.”

As a private/public partnership for county-wide economic development, the Daviess County Economic Development Corporation (DCEDC) is working to build a foundation for a better tomorrow in the communities within Daviess County, Indiana. A founding organization of the WestGate @ Crane Technology Park, DCEDC’s mission is to improve the standard of living in Daviess County by expanding and diversifying the economic base, promoting quality employment opportunities, and enhancing the overall quality of place. For more information, please visit www.developdaviess.com