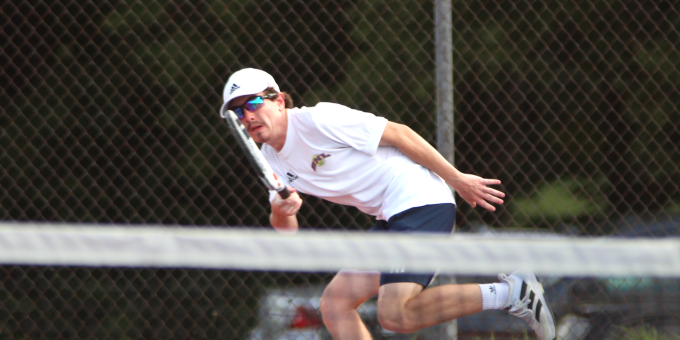 BEDFORD – Bedford North Lawrence, mired in a three-match skid, got a shot to cure its ills. Confidence is a great antidote for just about anything.

The Stars swept to a 5-0 victory over short-handed Brown County on the asphalt proving ground at BNL. The Eagles had only four available players, forfeited two matches, and won only five games on the three contested courts.

“It was a good night for us,” BNL coach Chris Kurtz said. “The guys put a lot of hours into preparing for this season and we’ve had a tough run early. We’ve faced some really strong competition and haven’t played to our potential. It’s been a mental grind.”

Needing only one win to secure the outcome, Jayden Kemp came through with little wasted energy, posting a 6-0, 6-0 victory over John Kirchoffer at No.2 singles. Graham Turner turned aside Jack Sichting 6-0, 6-2 at No.1.

BNL formed another new doubles combination at No.1, with Carter Kimmel and Nate Pemberton teaming for a 6-2, 6-1 victory over Owen East and Sawyer Gore.

“I think Carter and Nate were both struggling with confidence,” Kurtz said. “We paired them up tonight for the only doubles match and they responded very well.”