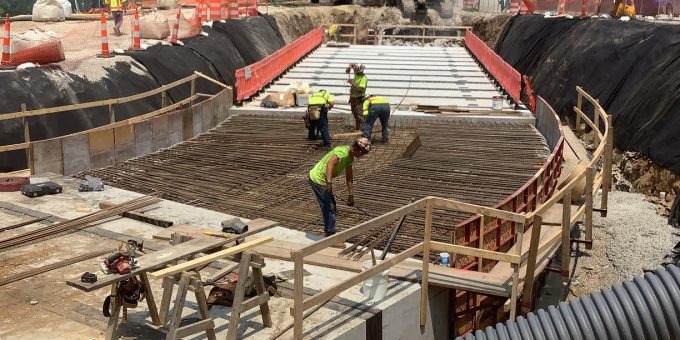 The City will provide regular public updates on a range of these improvements as they progress. City departments coordinate with one another, as well as with private developers, to minimize the impact on Bloomington residents and visitors.

On June 1st, Bloomington Parks and Recreation and Public Works created a cordoned-off detour, lined with orange barricades, through the southwest part of the parking lot south of City Hall. The detour area is for bicycle and pedestrian traffic only and bypasses the trail closure area to return trail users to the B-Line. This is a public safety precaution due to the need for the repair of the 140-foot-tall Johnson Creamery smokestack, which was determined by inspection on December 14, 2021, to be potentially dangerous. The detour proved to be safe and effective during its first week of use and will remain in place until the safety issues with the smokestack are resolved. The smokestack will not be lowered or removed until August at the earliest.

Installation of safety bollards on Morton and 8th Streets scheduled for June 6th was postponed due to supplies. These bollards will separate Farmers’ Market customers from vehicle traffic. Once installation begins, it will take up to four days to complete at each entrance. While the Morton side bollards are being installed, access to the City Hall parking lot will be from 8th Street. The closure will then be reversed with access from Morton.

Headley Road has re-opened to two-way traffic across the Griffy Lake causeway. While the road has re-opened, there are tasks to finish before the project is complete. Construction continues on the new trail connection at the southern end of the causeway; the new trail remains closed until construction is complete. Crews will work on installing the railings on the steps and ramps to the accessible pier, and also on installing the “kick rail” at the edges of the accessible pier. Pier users should exercise caution in these areas until the final installation is complete.

The paving of interior roads at Rose Hill Cemetery is complete and the cemetery has re-opened to all traffic. Work on the scatter garden is ongoing.

Pavement repairs are planned on Monday, June, 13th at the intersection of Walnut and 11th Streets as a part of the City’s new traffic signal installation project. Due to the location and type of work, the closure is expected to result in a full closure of 11th Street for one day. This new traffic signal and the new signal at Walnut and 14th Streets are on schedule for completion on or before July 29, 2022.

Paving on South Silver Creek Drive will be complete Thursday. Crews will move to Indiana Avenue from 13th to 17th Streets next week and mill and pave. Concrete crews will be installing ADA-compliant ramps in Gentry Estates ahead of a paving project there.