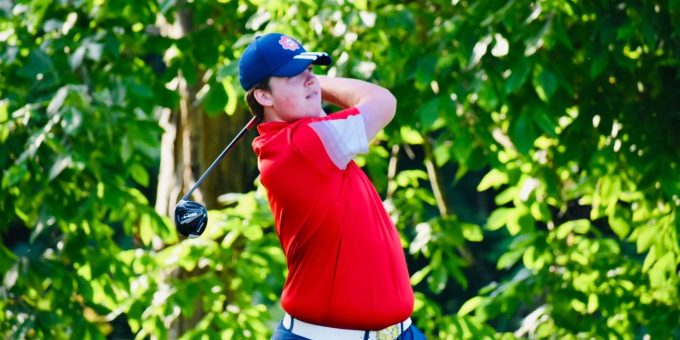 HENRYVILLE – Bedford North Lawrence’s season concluded in the IHSAA regional at Champions Pointe on Thursday, as the Stars finished 10th in the 18-team field.

The Stars, with Jett Jones leading the way, posted a team total of 327. The top three teams, plus the top five individuals who were not members of advancing teams, qualified for the state championship at Prairie View on Tuesday and Wednesday.

No.2 Bloomington South claimed the regional title with 292, while No.7 Silver Creek was second with 304. Jasper slipped into the third spot with 306, upsetting No.6 Center Grove (307 as the defending champion) for the state tickets.

Jones fired a 4-over 76, with one birdie and 14 pars, but missed the playoff for the final individual spot in the state finals by one stroke when he double-bogeyed the 15th hole.

“That’s a shame,” BNL coach Jeff Hein said. “He was playing really well, he just had a little chipping episode that didn’t go well. He struck it well. He was knocking on the door.”

BNL’s Trevin Hutchinson, the lone senior in the lineup, battled through a wild day with multiple birdies and bogeys before settling with an 81. Colton Staggs and freshman Tyler Bellush capped the scoring with 85s.

“It was one of those days, and I can’t quite put my finger on why we didn’t play well. It just wasn’t a very good day. We didn’t get going. We didn’t have a good front nine, for whatever reason.”

Borden’s A.J. Agnew was the medalist with a sensational round of 4-under 68 on the course that played 6,900 yards. South’s Happy Gilmore, Jasper’s Luke Schapprd and Center Grove’s Drew Rowen all fired 72s. Agnew and Rowen advanced as individuals, along with Columbus North’s Luke Schneider (74), Greenwood Christian’s Ian Reed (75) and Columbus North’s William Davis (75).

BNL will now start focusing on the 2023 season.

“They all have experience now,” Hein said. “They will have to spend time on the golf course, beat balls on the range, really work on the short game, play some tournaments and continue to get better.”