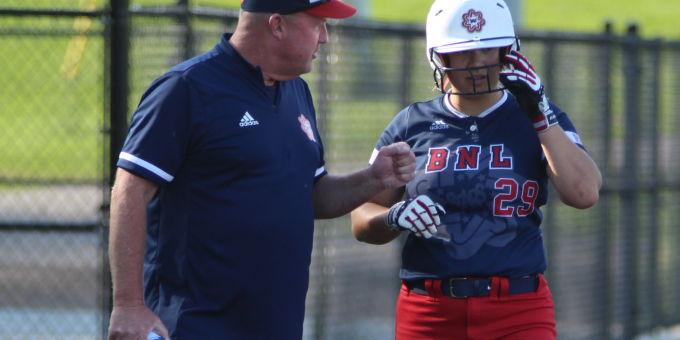 BEDFORD – And the first shall be last. Bedford North Lawrence started the 2022 season with a victory over Castle, and now the rematch will be the last game for one of them. That’s the one-and-done postseason pressure dynamic.

The No.5 Stars, fresh from their second straight sectional championship, will defend their Class 4A regional title when they visit the No.13 Knights in the one-game second stage of the state tournament series on Tuesday. The winner will return to BNL for the two-game semistate on Saturday, and that’s quite the motivational factor. So is revenge.

BNL (27-2) conquered the Knights 5-4, with freshmen phenom Ava Ratliff cracking two home runs in her powerful debut, at BNL on March 24. That was a great springboard into the campaign for the Stars. This one, with a trophy to the victor, means so much more. BNL will be challenged by an opponent with tremendous offensive firepower. The Knights (26-8) average 7.2 runs per game, and they exploded for all their runs in one inning during the first encounter.

“They’re solid, definitely a quality team,” BNL coach Brad Gilbert said. “They pitch well, play really good defense, they have kids that put the ball in play. We’ll have to play solid, we’ll have to eliminate the big inning. We’ll have to be careful with their hitting.”

Castle has seven regulars hitting over .350. Their offense came from Molly Bartz (double), Emma Boyer (double) and Brooklyn Ballis (two-run home run) against the Stars. Their leaders during the season have been senior Jackie Lis (.567, 7 homers, 27 RBIs despite missing 14 games with a leg injury), Balls (.429 with 27 RBIs) and Madison Beckhart (team-high 34 RBIs). Ballis has been the top hurler with a 14-6 record and 2.13 ERA.

But BNL’s attack is equally dangerous. The Stars have slugged 52 home runs (with Ratliff second in the state at 20), and Ratliff will command ultimate respect with her .538 average and 52 RBIs. Annie Waggoner, an Indiana State recruit, hits .427, Purdue recruit Braxton McCauley is a constant threat (.456, 7 HRs, 30 RBIs) and sectional hero Aliza Jewell has 7 HRs and 23 RBIs. Waggoner has been brilliant in the circle at 19-2 with a minuscule 1.18 ERA.

“When you look at other teams, there are always a couple of kids you want to stay away from, or be careful,” Gilbert said. “But if you look at our stats, I don’t know who you pick out. All of our kids have hit the ball well. We don’t have to have a certain girl be on each night. You never know who will be the one. It’s nice to see our kids hitting with confidence.

“I like our fight. Last week (in the sectional) was like nothing I’ve ever experienced, for us to be on the bus every night, it took us three bus trips to play three innings. I like the way the kids handled themselves and stayed calm, really focused. They have a common goal. Our slogan this year has been ‘All in’ and the kids are all in. It’s all about getting the win. It’s whatever we can do to win.”

“I hope it helps a lot,” Gilbert said. “I hope we can take last year’s regional, and last year’s semistate game, the kids that were involved in that, it should ease them a little bit. They’ve been there, been in the big moment. Hopefully we can keep our nerves down and control our emotions, settle into the game.

Castle powered through Evansville North (3-0), Jasper (6-0) and Evansville Central (8-6, rallying from a 4-0 deficit) to win the sectional.

The winner will meet either No.2 Whiteland or No.11 Shelbyville in the second game of the semistate. The other half of that bracket will be filled by the Roncalli-Avon winner and the Pendleton Heights-North Central survivor.

“We have a carrot helping lead this charge. We want to get back home,” Gilbert said. “We’re not looking far ahead, but our goal is to keeping winning and play the semistate on our home field. You take one step at a time, and our step is to win and get to play the semistate at home.”

Game notes: BNL is the defending regional champion. Castle has won five regional titles, the last in 2018. The winner will face either No.2 Whiteland or No.11 Shelbyville in the second game of the semistate at BNL on Saturday.