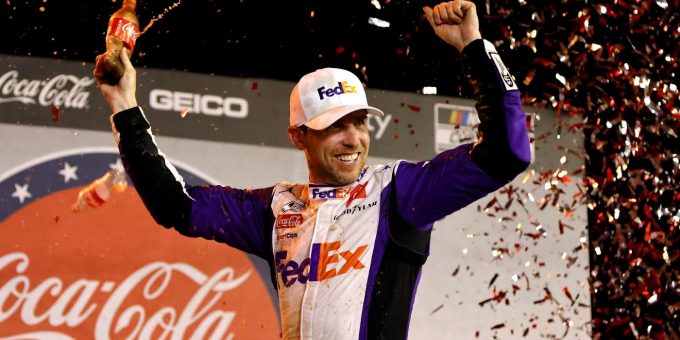 The race extended 13 laps past its scheduled 400-lap distance due to a green-white-checkered finish. Of the 37 cars that started the 63rd running of the Coca-Cola 600, the vast majority of them ended up either torn up, chewed up, spun out, or turned over – which included Hamlin. And in spite of all that, it was Hamlin who took home arguably the most difficult edition of NASCAR’s longest race ever seen.

After taking four fresh tires on his final pit stop heading into overtime, Hamlin emerged from a four-wide battle for the lead on the first restart, then held off a charge from Kyle Busch in double overtime to win the race. His margin over second-place was .119 of a second.

There were 18 caution periods for a total of 90 laps. Only 16 of the 37 drivers in the race finished on the lead lap.

With this win, Hamlin became the 12th driver in NASCAR history to win all three of the sport’s majors – the Daytona 500, the Coca-Cola 600, and the Southern 500 and he did so in what was the longest race in NASCAR history. At 413 laps, the 2022 Coca-Cola 600 was the longest race in NASCAR Cup Series history, totaling 619.5 miles and taking 5 hours, 16 minutes, and 16 seconds to complete.

Harvick earned his third top-five and seventh top-10 of the season. It was also his 10th top-five and 21st top-10 in 40 career NASCAR Cup Series starts at Charlotte.

“Our race was atrocious. We went to the back eight times, but everybody on our Mobil 1 Ford just kept plugging away and we wound up in a good position there at the end and wound up with a good finish, but it was ugly. Everybody’s night was ugly, for the most part. We just kept battling. I’ve been to this race a lot and I knew that the way the mile and a half races had gone this particular year that it was gonna be tough. There weren’t as many tire issues as I thought there were going to be, but it wound up just being spin-outs because the cars would just become an incredibly big handful as you’d get toward the end of the run. You just had to hang on to it, and it was definitely interesting, to say the least. You just kind of kept grinding away,” said Kevin Harvick, driver of the No. 4 Mobil 1 Ford Mustang

Briscoe spun while attempting to pass Kyle Larson for the lead on the penultimate lap. Nonetheless, Briscoe rallied to score an impressive fourth-place finish on the final green-white-checkered finish. Briscoe’s fourth-place result bettered his previous best NASCAR Cup Series finish at Charlotte– 23rd, earned in his first start at the track in last year’s Coca-Cola 600.

This was Briscoe’s third top-five and fourth top-10 of the season.

“We just had a really, really good Mahindra Tractors Ford and just super proud of everybody at SHR. We’ve obviously struggled really bad the last month and a half and we had a car capable of winning and I threw it away, plain and simple. I’m glad we were able to at least get back to fourth. It’s unfortunate. There are 100 different things I would’ve done differently if I could re-do it again, but obviously, you’re racing at the moment and I made a mistake and went too far. We’ll come back next week and see if we can cap it off,” said Chase Briscoe, driver of the No. 14 Mahindra Tractors Ford Mustang

Custer was on his way to a top-10 finish when he was collected in a multicar accident on the first attempt at a green-white-checkered finish. His car was too damaged to finish the race and he was credited with a 21st-place finish.

“The team did a great job working on the car all night and keeping up with the track. I was really happy with what we had and it felt like we had made big gains and turned things around. I felt like we had a good shot at the end, but it just ended up that we were in the wrong place at the wrong time. I really can’t wait to get to the track next weekend. We’re moving in the right direction and I’ve always loved racing at Gateway,” said Cole Custer, driver of the No. 41 Chicken Cock Whiskey Ford Mustang

Chase Elliott remains the championship leader after Charlotte with a 34-point advantage over second-place Ross Chastain.

The next event on the NASCAR Cup Series schedule is the inaugural Enjoy Illinois 300 presented by TicketSmarter on Sunday, June 5 at Gateway International Raceway near St. Louis. The race starts at 3:30 p.m. EDT with live coverage provided by FS1 and SiriusXM NASCAR Radio.