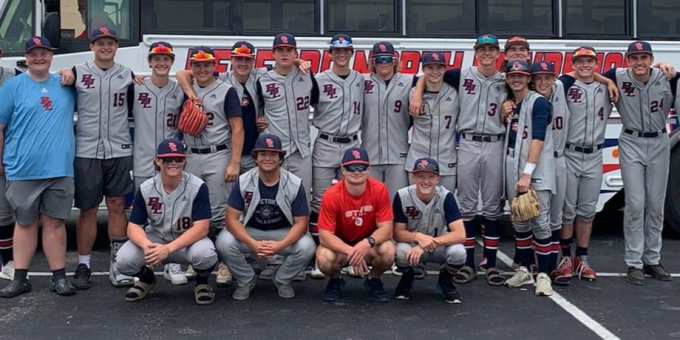 NORTH VERNON – The third time was definitely the charm for Bedford North Lawrence.

The Stars avenged two regular-season losses to Seymour, stopping the Owls 3-1 in the Class 4A sectional semifinal at Jennings County on Saturday afternoon. BNL (15-14) will face a rematch with New Albany in the championship game on Monday at 11 a.m.

BNL, which had suffered an 11-6 setback (in extra innings on April 18) and 8-1 loss (in the Hoosier Hills Conference tournament on May 9) to the Owls, scored two go-ahead runs in the fifth inning while advancing to the sectional final. The Stars won their last sectional in 2017.

“They always said beating a team three times is tough to do, and we proved that today,” BNL coach Jeff Callahan said. “We were able to do enough things, and our pitchers did a great job of throwing strikes.”

“We’ve pitched it really well most of the year,” Callahan said. “These young guys are really developing. Seymour got runners on in almost every inning, but we were able to make pitches and make plays to get of any issues.

“I was really proud of Cade. That’s a big moment, and he was a little upset that I took him out. I like that in our pitchers, that they want to be out there. But we felt the next time through the lineup we needed a different look.”

BNL took the lead in the third. Grant Dalton singled, Kaedyn Bennett sacrificed him to second, and Cal Gates sliced a RBI single to left. The Owls pulled even in the bottom of that frame on Charlie Longmeier’s two-out RBI single.

The Stars answered with the critical runs in the fifth. They loaded the bases with no out (Trace Rynders and Dalton reached on errors, and Bennett walked), and Kylar Fisher plated the first run with a sacrifice fly to right. Jonny Stone drove in the second run with a check-swing single to right.

Gates and Stone had two hits each for BNL. Dalton threw out a runner at third in the third, and the Owls left seven on base.

The Stars will clash with the Bulldogs, who edged Jeffersonville 6-5 in the first semifinal. BNL conquered New Albany 5-4 at BNL on May 2, but the Bulldogs are expected to send ace hurler Tucker Biven (a University of Louisville recruit) to the mound in the finale.

“He’s a great pitcher,” Callahan said. “He runs it up there 90-plus. We’ll have to have a good approach, work some counts. It’s tough to dig in against a guy who throws that hard. But we have to go battle. We need to go out there with confidence, roll the dice and see what happens.”