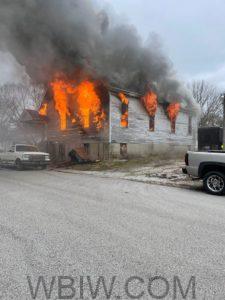 DUGGER – One person has died as a result of a fire Wednesday afternoon that spread from an old church in Dugger, Indiana to a house next door.

When Union Township and Linton firefighters arrived at 12:15 p.m. at 8065 East Church Street in Dugger they found the structure, which once housed the United Methodist Church of Dugger, was fully engulfed in flames. Adjacent home and vehicle also caught fire because of the intense heat.

The cause of the fire is under investigation by the State Fire Marshal’s Office.