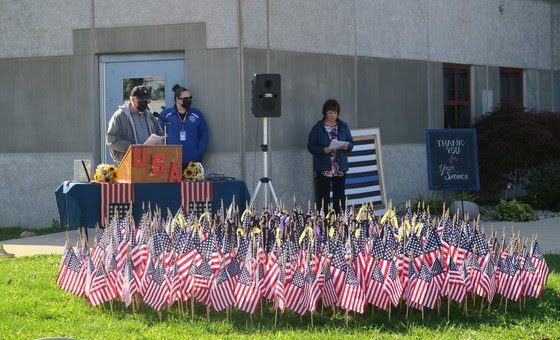 ROCKVILLE – Rockville Correctional Facility (RCF) Community Volunteer Coordinator Susie Martin brought together current and former facility staff in honor of America’s military veterans.  For the 15th year running, staff was able to take a few minutes to thank those who have served in the armed forces.

Retired Correctional Staff Max Ditto was again on hand to assist in the reading of those who gave the ultimate sacrifice while serving, as well as those who returned from service who have since earned their great reward, surviving veterans, and last but certainly not least, those who are currently on active duty or in the reserves.

This year’s ceremony carried with it an emotional tribute to Kristen Sylvia-Butler.  After fighting and defeating cancer, Kristen unexpectedly passed away recently.  Kristen served as RCF’s staff mentor for an Indiana Department of Correction initiative supporting our military veterans who are incarcerated.  As with everything she did, Kristen jumped right into this role providing meaningful leadership to the group.  Choking back tears, Susie Martin expressed the heartfelt gratitude of the offenders and staff for Kristen’s significant contribution.

Flags for the event are sponsored by staff as not only a way to say thank you, but to raise money for local organizations helping to offset hardships experienced by veterans in need of a helping hand.