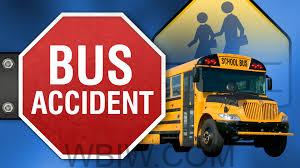 The preliminary investigation by an Indiana State Police trooper revealed that Randall Easton, 69, of West Terre Haute, was driving a 2022 International School Bus and was stationary in the crossover of State Road 63 and Bolton Road attempting to go north.  A 2020 F450 Ford construction truck driven by 32-year-old Rustin Plunkett, of Delphi, was traveling south in the northbound passing lane removing traffic cones from the construction zone.  Easton looked south and observed that northbound traffic on State Road 63 was clear but failed to look to the north.  Plunkett, who had pulled into the path of the crossover, still traveling south, was struck by Easton when he accelerated and collided with the construction truck on the passenger side.

Three students were on the school bus at the time of the accident.  No injuries were reported. The parents of the students were contacted and arrived on the scene to take each of them home.