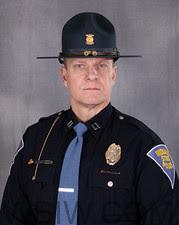 COLUMBUS – The Superintendent of the Indiana State Police, Douglas G. Carter, has announced the promotion of Captain Robert D. Simpson to the rank of Major.  Major Simpson will serve as the Assistant Chief of Staff Communications and Information Systems and will oversee the Regional Dispatch Centers, Indiana Criminal History Repository, Indiana Data, and Communication System, and the Indiana Vehicle Crash Records Program as well as advise on all information technology needs for the department.

Simpson, who is originally from Columbus, Indiana, is a 1984 graduate of Columbus North High School and earned his Associate’s Degree in Criminal Justice from Vincennes University in 1986.  Simpson graduated from the 104th Session of the Indiana Law Enforcement Academy in March of 1991 and served with the Columbus Police Department until 1999.

In 2008, Simpson was selected to serve with the FBI as a Task Force Officer with the FBI Cyber Crimes Division and in 2010, he was transferred to the Technical Services Unit specializing in technical investigations.  In 2015, Simpson was promoted to First Sergeant in the Criminal Justice Data Division where he served as Assistant Commander in the Information Technology Section.  In April of 2018, Simpson graduated from the FBI National Academy’s 272nd session in Quantico, Virginia.

In January of 2020, Simpson was promoted to the rank of Captain and served as the Criminal Justice Data Division Commander until this recent promotion.

Simpson and his wife Julie have five children, nine grandchildren and reside in Columbus, Indiana.