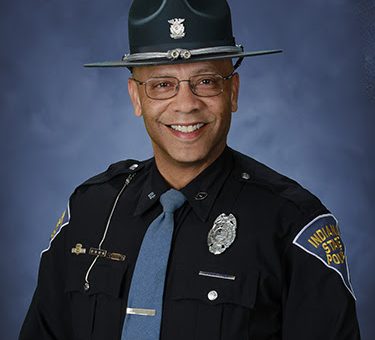 Joel Mitchem graduated from Jeffersonville High School in 1986.  After high school, Joel attended Indiana State University, where he earned a B.S. in Aviation Administration in 1992.  After receiving his degree, Joel served as a police officer with the Terre Haute Police Department.

Trooper Mitchem began his career with ISP after graduating from the 52nd recruit academy in 1995. Trooper Mitchem served his first three years assigned to the Lowell district before transferring to the Versailles post in 1998.  While at Versailles, Joel Mitchem served as a road trooper assigned to Dearborn County.  He also served as a gaming agent onboard the Argosy Casino boat.

Trooper Mitchem transferred back home to the Sellersburg post in 2014 after serving in Operation Iraqi Freedom and Operation Enduring Freedom with the U.S. Army.  In 2014, Joel Mitchem also obtained a Master’s in Leadership Management from Webster University.  Since returning, Master Trooper Mitchem has served and patrolled in the Sellersburg District.

Joel Mitchem is the proud father of four and currently resides in Harrison County.

Join us in congratulating Master Trooper Mitchem on a job well done.