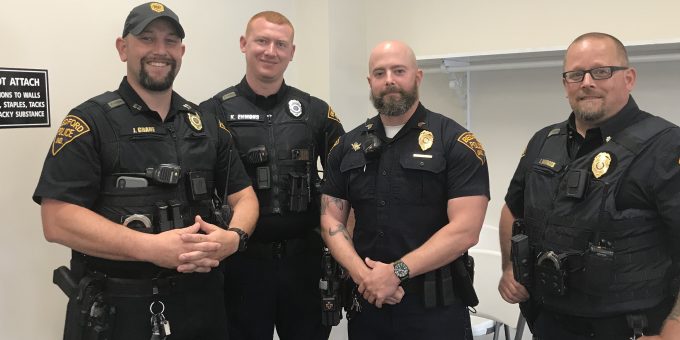 BEDFORD – Five Bedford Police officers were given a Life-Saving Award Monday afternoon for their efforts in saving 17-year old Maddie Lynch who was involved in a car accident on a snowy January afternoon this year.

Two vehicles collided during inclement weather on State Road 58. Lynch was seriously injured. Bedford Police officers learned that the closest ambulance would be coming from Bloomington so officers loaded Lynch in their police car and rushed her to the hospital.

“I know that these officers, were responsible for saving her life,” said Bedford Police Chief Terry Moore during the presentation.

Four of the officers were presented the award, Officer Clint Swanson was not able to attend the presentation.

“Thank you all for a job well done. The city greatly appreciates all you do for our community,” said Bedford Mayor Sam Craig.