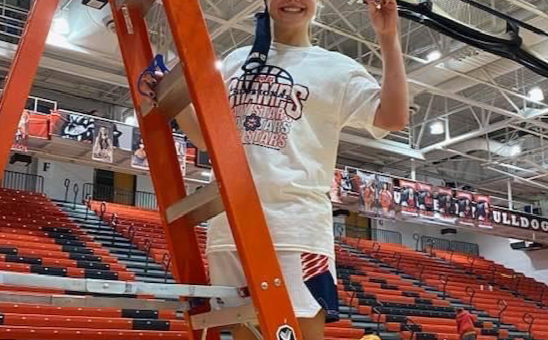 NEW ALBANY – The celebration scene was surreal, although fitting as a constant reminder of the virus impact. In an empty Doghouse at New Albany, the massive gymnasium now as quiet as a mouse house, Bedford North Lawrence climbed the ladder to claim the coveted net pieces for another sectional championship.

No fans offering congratulations, no parents snapping a thousand photos, no hugs. It was the most muted net cutting, a tradition of Hoosier Hysteria, in history.

What it took was a hard-nosed, mentally-tough, heart-of-a-warrior comeback. Jennings County, with no fear and intimidation, was poised to end BNL’s dynasty with a ferocious first half. The Stars were rocked, admittedly a little nervous, as the Panthers exploited their vulnerability inside for a 26-14 lead.

No big deal. BNL (21-2) responded with the expected resolve, with the usual characteristics of a champion: suffocating defense, fearless free throws, last-minute patience and execution.

“That wins you championships,” BNL coach Jeff Allen said. “That’s huge, you have to have kids step up there and do that.”

BNL had many heroes during the rally. Irye Gomez, the third-leading scorer on a team with multiple weapons, totaled 14 of her team-high 19 in the second half, none bigger than her backcourt steal for a layup and a 49-45 lead. Jenna Louden, often overlooked because of her modest scoring average, hit four clutch free throws. Chloe McKnight, the slightest of physical defenders, tackled the assignment of 6-0 Jennings ace Juliann Woodard and stood her ground.

That’s what a defending sectional champion does. Whatever it takes.

What it took was toughness. The Panthers were on fire, as Woodard powered her way to 12 first-half points and got most of those from point-blank range. Brooke Mowery buried two treys during a Jennings 11-0 burst, and the Stars were squirming in discomfort.

Nervous, Gomez? The gum-chewing senior had to agree. “For sure,” she smiled. “For sure.”

“Their kids were well prepared and they played hard,” Allen said. “Kids on both teams made plays and played their hearts out. They scored, which kept us from transitioning. You can’t transition when the ball is coming out of the net. It was a bad combination. We were lucky to be as close as we were in the first half.”

Down 33-26 at the half, down by 10 when Mowery started the third quarter with another bomb, BNL gritted teeth and turned to attack. Gomez scored three straight times during the next two minutes. After the Stars squandered four chances to take the lead, Karsyn Norman converted a drive through traffic – she totaled 16 points – to give the Stars a 37-36 lead, and it was game on.

“Our confidence was back,” Allen said, concerned when the BNL comeback stalled a little. “As a coach, we’ve battled back, and if we don’t take the lead, does the momentum swing back? We finally got the lead.”

“We were a little frustrated because our shots weren’t going in,” Louden said. “We didn’t really have shots go in the whole tournament. But we stayed calm. In the second half, we were going to stay together and get through it.”

The final quarter was tense. BNL never could extend any lead. But neither could Jennings get a possession to draw even or go ahead. Louden made two free throws for a 51-47 lead with 50 seconds left, two more for 53-49 with 25 seconds remaining. She was targeted and took it personally.

“I don’t really score, I just help my team in other areas,” Louden said. ”So when they thought I couldn’t knock down a free throw, I took it the wrong way. You know, I can.

“I was like ‘My team needs these.’ I told myself I was going to hit them. I was relieved, but at the same time I was pretty confident.”

“Outstanding job by Jenna,” Allen said. “A lot of pressure.”

Norman iced the victory was another pair from the line with 7.1 seconds left.

Lost in the tumult was BNL’s approach to the final rush. During the loss at Columbus East, the Stars had remarkably rallied from a 24-3 deficit, took the lead and had the ball with 90 seconds left, and got in a hurry to continue scoring. Lesson learned. This time, the Stars pulled out and dared the Panthers to foul them.

“We definitely learned from that,” Norman said. “A lot. I was a lot more confident.”

Lost in the heated moments was the battle between McKnight and Woodard – arguably the most talented post player BNL has faced this season. Woodard finished with 20 points, but Jennings noticeably stalled when struggling to get her involved as McKnight fronted her on the interior. Give away 4 inches and probably 50 pounds? No big deal.

“I knew Chloe (Spreen) had three fouls and couldn’t get another one, because we needed her on the offensive end,” McKnight said. “So I had to step up. I just tried to front her and keep the ball out of her hands. My teammates had my back if they threw it over.

“I had to keep my mentality. When I got hit, just keep taking it and not get frustrated.”

BNL took the hits, took the best Jennings could offer. When the dust settled, when the roars softened and the echoes from the chatter among the Stars on the floor was the only noise in the Doghouse, BNL was again a champion and climbing ladders. After 10 times in a row, with kids who don’t know what it’s like to not win, the Stars knew what to do. Whatever it took.