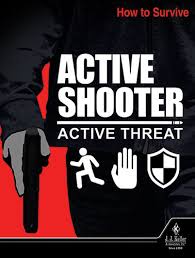 (BEDFORD) – Last week, Bedford Police Officers were dispatched to a possible person with a gun call at Walmart.

The situation was a prank, but yet it was very serious with several people affected by a large police response at the retail store.

Bedford Police along with deputies of the Lawrence County Sheriff’s Department and Indiana State Police responded quickly to last week’s call. Officers were able to get the situation under control within an hour, according to Bedford Police Chief Terry Moore.

“Walmart employees had evacuations underway when our officers arrived. It is important in these situations to have your hands where officers can see them. The officers are looking for a person with a gun,” said Chief Moore.

Emergencies of any size can happen in small or large metropolitan areas, and Bedford Police Department officers train regularly on situations similar to what happened last week.

Officer Blake Wade, who is a firearms instructor, trains local businesses on what to do in Active Shooter Situations.

“When shots ring out, we teach Run, Hide, or Fight,” said Wade.

Some of the recommendations law enforcement provides to the public in active shooter situations can be found below.

An Active Shooter is an individual actively engaged in killing or attempting to kill people in a confined and populated area. In most cases, active shooters use firearm(s) and there is no pattern or method to the selection of victims.

Here are actions you can take in active shooter situations.

HIDE: Hide silently in as safe place as possible

FIGHT: Take Action to disrupt or incapacitate the shooter

“There is not an active investigation at this time about the Walmart incident,’ said Chief Terry Moore. “The department has not received any more information and the incident was considered a prank.”

If any business would like to have Bedford Police Department present a 45-minute training on Active Shooter response contact Chief Terry Moore at 812-275-3311.