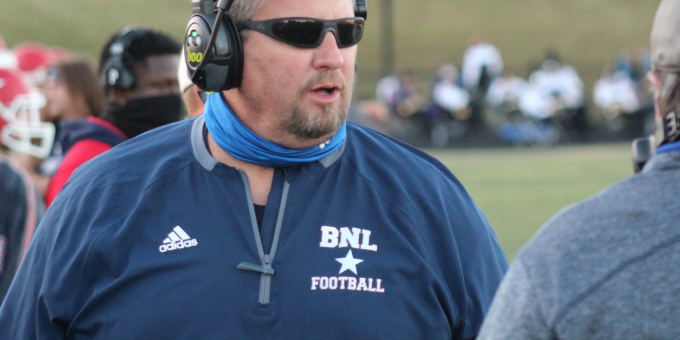 BEDFORD – The worst-case scenario has struck the Bedford North Lawrence football program and cost the Stars their postseason.

The school announced, because of positive COVID-19 cases, the cancellation of the remainder of the 2020 season on Wednesday. BNL (2-7) was scheduled to face New Albany in the semifinal round of the Class 5A sectional on Oct. 30.

The school statement indicated “in order to provide the safest environment possible, our best option is to cancel the remainder of the high school football season. Pursuant to Lawrence County Health Department and North Lawrence Community School guidelines, contact tracing is under way and the identified individuals are being notified.”

BNL is the third team in the state to shut down the program and miss the state tournament.

“It’s horrible,” BNL coach Steve Weber said. “You’d like for your kids, that have worked as hard as they have, to get the opportunity to perform in what I call the real season. It’s your chance to show, to everybody, how you’ve improved and what you’ve done. Win or lose, you wanted to put your best product out there and show what we’ve accomplished.”

The cancellation meant the end of careers for 10 seniors on the roster.

“It affects anybody who has put effort into this,” Weber said. “It‘s devastating to them. The seniors won’t get the chance to relive it. They stuck with it. They don’t get that chance, and it’s been a tough year for them. It’s been tough for everyone. The virus has screwed a lot of things up.”

The virus was always a looming shadow, even as the Stars progressed through the regular season. The IHSAA entered Phase 2 in its return-to-play plan, which allowed for contact in practices and workouts, extended practice times, in July, forcing all teams across the state to prepare in a hurry. The coronavirus protocols of personal hygiene, six-feet distancing and hand washing were in place.

BNL went through the preseason without a hitch, then lost four players for two weeks after exposure to a student with a positive test forced them into quarantine. The Stars bounced back through that and won back-to-back games at Jennings County and Madison to signal a return to normalcy.

“As we got toward the middle of the season, you kind of forgot about it,” Weber said. “You had the feeling it was going to work. And then you get this.”

BNL ended on a five-game losing streak. The silver lining was the completion of the regular season. Many teams across the state were forced to miss games.

“Not many teams got a 9-game season,” Weber said. “And we did. I know it sucks, it hurts, but we got those nine games. We should be proud we lasted that long, with all this crap going on.

“I hate it for all of them. It’s something you don’t want to have happen, especially now. And not just for us, but the team we were going to play. We did everything we could as far as wearing masks, following the rules.”

New Albany will now advance to the sectional final on Nov. 6, awaiting the winner of the Floyd Central-Jeffersonville in the other semifinal.