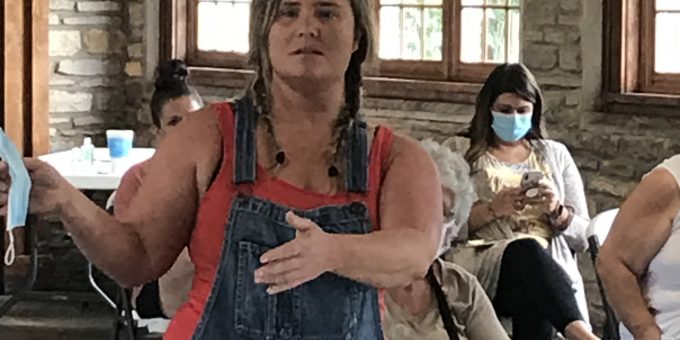 (BEDFORD) – The Bedford Parks Department board tabled the vote on whether the Wilson Park ballfield should become a dog park.

The Parks Department board held a public hearing where several residents weighed in on the idea. Some spoke against the proposal, some for it, and some said they would like to have a dog park but not at Wilson Park.

Bedford Mayor Sam Craig and Parks Director Barry Jeskewich could have decided the fate of Wilson Park but Mayor Craig wanted to give the public the chance to weigh in on the matter.

Several emails have been sent to Craig, Jeskewich, and park board members from residents giving officials input on the idea of a dog park.

The meeting on Tuesday evening was well attended, with the windows of the Wilson Park Shelter House opened so those attending could hear the meeting. Not everyone was able to be inside the meeting due to COVID-19 guidelines.

Many of those who spoke against the proposal are residents who live in the neighborhood, citing that Wilson Park gives children a place to play. With the City of Bedford limited on things for children to do, they say this will eliminate one of the safe places for children to play a variety of sports from baseball, softball, soccer, and even flying a kite.

Many cited the long history of the Wilson Park ballfield and how many professional sports teams used the park for practice including the Chicago Cubs and Cincinnati Reds. Some of Bedford’s own have also become professional ballplayers who played on this field.

However, Bedford Attorney Scott Callahan, who himself has played many times at Wilson Park and had lived in the neighborhood, told the Bedford Parks Board the time has passed for the park to be used as a ballfield.

“The historical significance of those times people reflect on now has passed. The park does not get utilized enough to be kept as a ball field; it is time to put other life into it,” said Callahan.

Callahan’s father, John, however, spoke previously in keeping it a ball park.

The Lawrence County 4-H Group would like to see it as a dog park so adults can use it because the 4-H facility at the fairgrounds is hard to use and is some distance to drive for city residents. According to Gerri Bassinger, dog shows could be held at Wilson Park. Bassinger has taught dog obedience for more than 31 years.

Amanda Brock of the Lawrence County Extension stated, “I am just glad we are having this discussion and hope the Bedford Parks Department finds a place to have a dog park.”

The question remains is if Wilson Park is being utilized enough or can the park attract more people if it becomes a dog park.

Mayor Craig stated he did not want to sink a bunch of money into changing the use of Wilson Park to be only used by 10 to 20 people.

Wilson Park was chosen because some fencing is already in place, and in this tight budget situation it would be easy to convert this location into a dog park.

At the end of the discussion, Bedford Parks Board President Tim Deckard stated he is opposed to the idea of Wilson Park being a dog park.

The Bedford Parks board just had a new member join the board (Jo Underwood) and the remaining members wanted to give her an opportunity to look over the information and be able for the full board to make this important decision.