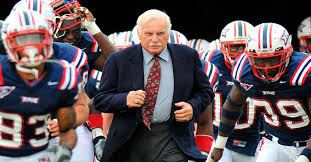 Annually, the American Heart Association, the leading voluntary health organization devoted to a world of longer, healthier lives, and the Bryant Family are proud to present these awards to raise critical funds in honor of Bear Bryant’s legacy.

The Lifetime Achievement Award honors a coach for outstanding career accomplishments both on and off the field. Schnellenberger joins a roster of the best in college football coaching, including Bill Snyder (2020), Frank Beamer (2019), Steve Spurrier (2018), and many others over the last three decades.

Behind the scenes, the Paul “Bear” Bryant Awards are much bigger than a season or career success. They provide an opportunity to shine a spotlight on heart disease and stroke – the nation’s No. 1 and No. 5 health threats. Since the adoption of the name, the Paul “Bear” Bryant Awards have raised millions of dollars for the American Heart Association, funding research, education and advocacy efforts, and saving countless lives. Before dying of a heart attack in 1983, “Bear” talked about being bigger than something other than himself. The awards offer an opportunity to do just that — to join the American Heart Association in the fight against heart disease and stroke.

Now in its 35th year, the Paul “Bear” Bryant Awards also recognize the country’s top college football coach. The Coach of the Year Award – presented each January – is the only college coaching honor selected after all bowl games and National Championship are concluded.

“Thank you for this award. I am truly honored to receive the Paul ’Bear’ Bryant Lifetime Achievement Award,” replied Schellenberger upon hearing the news. “It is an even greater honor to be placed with past honorees, most who have been friends and colleagues at one time or another. I am reflecting on the five years I was with Coach Bryant at Alabama and the three national championships. Coach Bryant was always a mentor and friend, and one of my favorite memories is being tasked by Coach Bryant to recruit Joe Namath to become the quarterback. I take pride that Coach Bryant asked me to go to Beaver Falls, and the rest is history. We look forward to celebrating this Lifetime Achievement Award with everyone.”

2020 Lifetime Achievement Award recipient, Bill Snyder, replied to the news with the following statement: “Howard Schnellenberger, as we all know, is one of the most successful coaches in college football history. He is also one of the most committed, strong, disciplined, consistent, and responsible leaders of young men in our profession; and as such, although demanding, a very caring individual. Congratulations, Howard. I am so very proud of you and your wife, Beverlee. I can assure you that the Paul “Bear” Bryant Lifetime Achievement Award is as meaningful as any award one could achieve in our profession. The awards dinner and ceremony will leave a lifetime lasting memory.”

Schnellenberger’s coaching tenure spanned an impressive 54 years, comprising of The University of Miami’s first ever National Championship in 1983, a 6-0 collegiate bowl game record, seven NFL Playoffs, including an undefeated season serving as the offensive coordinator for the 1973 Super Bowl Champion Miami Dolphins, guiding The University of Louisville to a top-10 nationally ranked football program, and serving as the founding father of Florida Atlantic University’s football program.

On December 4, 2011, Coach Schnellenberger coached his final game in the newly opened Florida Atlantic University Football Stadium, better known as “The House that Howard Built,” which was later named in his honor in 2014. He rounded out his historic coaching career with a collegiate record of 158-151-3.

Marathon Oil, an independent exploration and production company based in Houston, has served as the presenting sponsor of the Paul “Bear” Bryant Awards for over 10 years, underscoring the company’s commitment to the health and well-being of their employees, families, and communities. Marathon Oil works with leading community organizations that share their core values, like the American Heart Association, to advance important public health initiatives that promote the common good and protect the public.