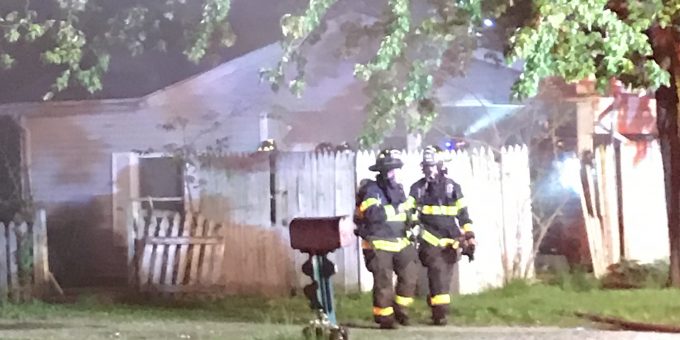 (MITCHELL ) – A gas leak may have sparked a fire at 1132 West Oak Street in Mitchell.

The alarm came in around 11:10 p.m. Tuesday, which would make this the second house fire within 24 hours on Oak Street. Another home at 623 Oak Street was destroyed in a blaze reported at 7:30 a.m. Tuesday.

Mitchell and Marion Township Fire Departments were dispatched to emergency medical runs just before the fire was reported.

This allowed the fire departments to arrive at the scene quickly to extinguish the fire.

“Back in December the gas company notified us that our gas bill was higher than normal. And we kept smelling gas; however, no problem was ever located. Everything checked out fine then,” said homeowner Kelly Morris.

“I was just about ready to go to bed and lit a cigarette when I heard a loud boom and the door came off the hinges,” stated Daniel Guirkins, who was also staying at the home.

Both Morris and Guirkins were able to escape the home uninjured in addition to their seven dogs.

“We are just thankful that no one was injured,” Morris added.

Firefighters were able to contain the fire quickly but the home sustained fire, smoke, and water damage. Most of the damage from the fire was confined to a bedroom. Firefighters did made sure the fire did not extend into the attic and that the blaze was completely out.

No individuals from the fire department were available to provide any additional information regarding the blaze.