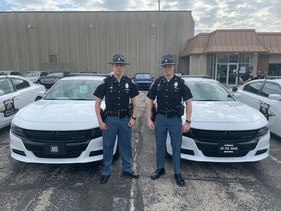 The probationary officers recently completed a three month field training period with veteran troopers. They will serve a one-year probationary period before attaining permanent status as a trooper.

In addition to the field training, the new officers received over 900 hours of structured training in law enforcement techniques while at the Indiana State Police Recruit Academy.

Two of the troopers receiving a car Tuesday morning are assigned to the Sellersburg District and will begin solo patrol.

After high school, Boley enlisted in the U.S. Army and was an airborne infantryman in the 3rd Ranger Battalion. Probationary Trooper Boley enjoys weightlifting and fishing. Clay and his wife, Destiny, reside in Clark County. Trooper Boley’s primary patrol counties will be Clark and Floyd.

Trooper Dakota Novak is from Marengo and a graduate of Crawford County High School.

Novak also attended Prosser Career Education School with training in Firefighting and EMS and worked as a heavy equipment operator before becoming a trooper. Dakota has numerous hobbies, including hunting, golf, and woodworking. Trooper Novak and his wife, Shaifer, reside in Harrison County, which will be his primary area of patrol.