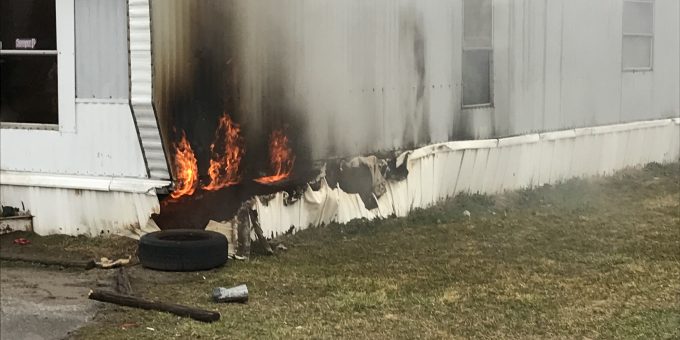 (BEDFORD) – Shawswick and Marion Township Fire Departments responded to a mobile home fire at approximately 4:40 p.m. Monday in the 1100 block of Sheridan Drive in the Pride Estates Mobile Home Park.

The fire started when a five-year-old set a pile of clothes on fire.

This will make the second mobile home fire at Pride Estates in a year.

The fire caused extensive damage to the mobile home, however, no one was injured due to the blaze.

A baby sitter was with the two children when the blaze broke out and they all made it safely outside.

“I was on my way home from work and seen the emergency vehicle responding to the blaze. I saw the smoke billowing from the mobile home and rushed inside to make sure the children were not inside,” stated Carla Fleener, mother of the children.

“The children were taken quickly over to a neighbors residence across the street when the blaze was discovered,” said Phil Thorne, owner of the mobile home.

According to Fleener she had just purchased new furniture for the home with her tax check and did not have renter’s insurance. She has lived in the home for over a year.

The American Red Cross was contacted to try to find the family a place to stay for the evening.

The family is in need of the following clothing.

You can contact Carla Fleener at 812-578-9152 to coordinate in dropping off the clothing.

The Lawrence County Police and AMR Ambulance Service also responded to the fire. LCPD assisted the fire department in investigating the cause of the fire. There were smoke detectors in the home according to the occupants of the home.

As a reminder during the change over to Daylight Savings Time, it is time to check your smoke detectors to make sure they are working properly and to change the batteries.