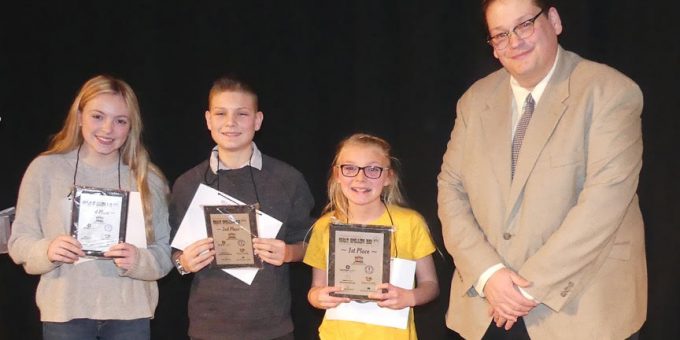 (PAOLI) – Orange County’s Great Spelling Bee, originated by Orange County Publishing in 2015, returned on Feb. 23rd and, for the first time in the event’s six-year history, championship honors were captured by a Springs Valley competitor.

With just six rounds in the books, Moffatt was the last student standing after correctly spelling “explosive.” She then went on to tackle “fraught” to secure the win.

Moffatt is the daughter of Keana and Caleb Moffatt of West Baden Springs.

“We say congratulations to these top winners and to all the 24 finalists from around Orange County who earned a spot on our stage for the contest,” said Miles Flynn, Orange County Publishing Managing Editor and the bee’s organizer. “Making it through the classroom bees, the grade-level bees and the schoolwide bees to get up on this stage is quite an honor in itself, and all of the students did a great job.”

As champion, Addi Moffatt will now move on to represent Orange County as one of approximately 300 students from around the United States at the Scripps National Spelling Bee in Washington, D.C. She and one parent or guardian will have all travel, lodging, meal and incidental costs covered for the six-night trip. She’ll arrive in the nation’s capital on May 24.

Flynn also thanked this year’s judges, Sarann Weeks, Todd Marshall and Robert Henderson, as well as all of the administrators and teachers who helped with selecting the 24 finalists for the countywide contest.

Scripps National Spelling Bee competitors will get acquainted during a barbecue on Memorial Day. Preliminary rounds and the finals will follow, and all participants will get to take part in the awards banquet and farewell party before heading back home.