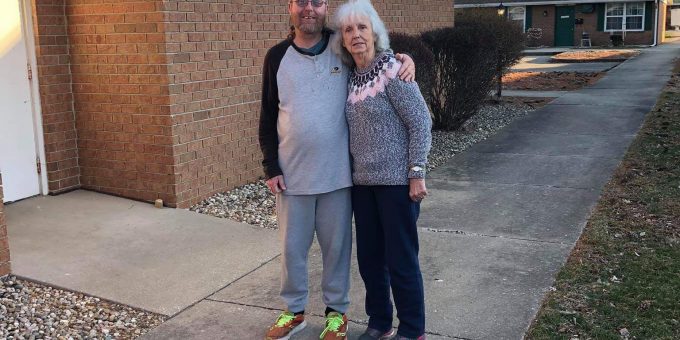 (MITCHELL) – Standing out in the cold on January 28th, Linna Reynolds did not know what she was going to do as she watched as fire consume her home.

“I lived in this house ever since my son Richard was born. I will be needing a lot of help,” Linna lamented the night of the fire. The family had no insurance on the home.

The family has struggled and now a fire consumed their home. Linna had no transportation and was walking to do routine business prior to the fire.

One of her neighbors, Brandon Hack, along with several others throughout the City of Mitchell responded to her call for help.

Brandon Hack did not want to be interviewed or have attention drawn to him because he stepped up to lend a helping hand.

An account was set up at Mutual Bank to collect cash for the Reynolds. McDonald’s in Mitchell donated sales, an online fundraiser was set up by other neighbors including Teresa Reynolds, who is not a relative, Bride of Christ Church, and many others who remained nameless.

The day following the fire, many people assisted them in cleaning and salvaging what they could from the fire.

The Reynolds were able to get a 2007 Pontiac G5 and have found an apartment in Mitchell.

Linna and Richard Reynolds want to thank everyone who reached out and helped them in their time of need.