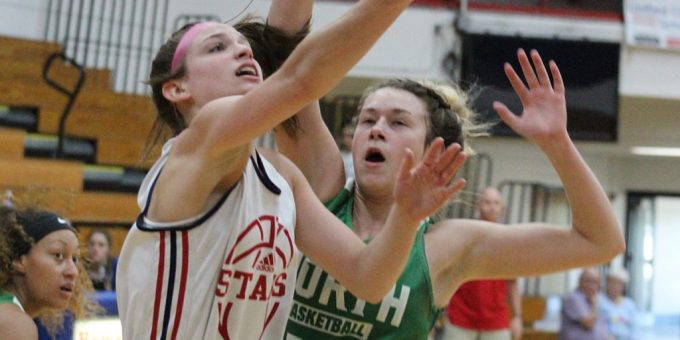 BEDFORD – Removing the thorn wasn’t a Mom-with-a-needle prick job. Evansville North needed a surgeon. The barb was imbedded deep in the psyche, the region of the brain where doubt arises and fears dismay.

The procedure was successful. The Huskies are now pressing on the upward way, gaining new heights after finally – after 9 consecutive losses to their nemesis – performing the exorcism of Castle to win a sectional championship.

For the first time since 2011, and for only the fourth time in program history, North has gained new heights, planted on higher ground, as it advanced to the second stage of the state tournament series. The Huskies (20-5) will clash with powerful Bedford North Lawrence (19-5) in the second game of the Class 4A regional at Columbus North on Saturday.

That winner will face either East Central (22-5) or upstart Franklin Central (15-11) in the championship game on Saturday night.

The sectional celebration was years in the making. When it’s been three seasons since a win over the Knights, when that rival has been responsible for your tournament ouster four straight years, tears of joy will flow. That was the sweetest net cutting in a long time, especially considering North had lost twice to Castle during the regular season.

“Castle had been a thorn in our side,” North coach Tyler Choate said. “The girls were laser focused. It was cool to see.”

The first Castle loss this season was a 58-57 overtime setback. OK, that’s promising. But the second was a 53-33 smackdown in the Southern Indiana Conference tournament in mid-January. A week later, the Huskies got surprised 56-45 at Forest Park. The season was teetering.

“As crazy as it sounds, that showed us we had work to do,” Choate said. “We were having a good year, but that made us more hungry to finish off the season.”

What does North feed on? Defense. The Huskies chart consecutive stops, and three in a row during a contest is called a “kill.” “If we get five kills, we think we’re going to win,” Choate said. He has the athletes to kill a lot.

The scoring leader is senior Kenna Hisle (14.0), who has signed with Southern Indiana. Sophomore center Kaliah Neighbors has been a big addition at 11.6 points and 7.1 boards, but the key could be senior Gabby Joyner (10.3 points) as the energy catalyst.

“What keeps us going is Joyner,” Choate said. “She’s so athletic, her defensive tenacity and energy is our spark.”

The Stars got a preview glimpse of North during the summer scrimmages in June, conquering the Huskies twice during those unofficial games. The second one was in BNL Fieldhouse, with the Stars prevailing 44-38 in that one. For whatever those are worth at this point.

“We’ve had a look at each other,” BNL coach Jeff Allen said. “They cause some problems for us, but we can cause problems for them. Their length and ability to rebound is a concern for us.”

Neighbors personifies that issue. She had 11 points in the second scrimmage and helped the Huskies punish BNL on the boards to erase a 10-point deficit. Her agile footwork in the post and passing ability when doubled make her a potential threat. Hisle added 14 points.

”She definitely has a scorer’s mentality,” Allen said of Hisle, who became the third player in program history to reach 1,000 career points. “She’s looking to score when she gets the basketball. We have to contain those three kids, not let them have second-chance opportunities.”

“Chloe really shoots the ball well, but I really like the freshman guard (Karsyn Norman),” Choate said. “She’s the one. She does a lot, handling the ball, driving to the basket, and she’s a great passer. And if they’re making 3-pointers, they’re tough to beat.

“We have to take care of the ball. They’re not big, outside of Webb, but they put pressure on the ball. They attack the offensive glass really well. If we don’t box out, the second shots will kill us.”

The main question: will North be satisfied now? Castle was such a huge obstacle, mentally and emotionally. The Huskies must now recharge for an even bigger hurdle. BNL, according to the Sagarin ratings, is the regional favorite, and the Stars are on familiar turf, making their ninth straight regional trip.

“Winning the sectional was very emotional for us,” Choate said. “The challenge now is to snap out of that.”

The regional champion will advance to the one-game semistate on Feb. 22 (at ether Jasper or Jeffersonville) against the winner from the regional at Decatur Central.