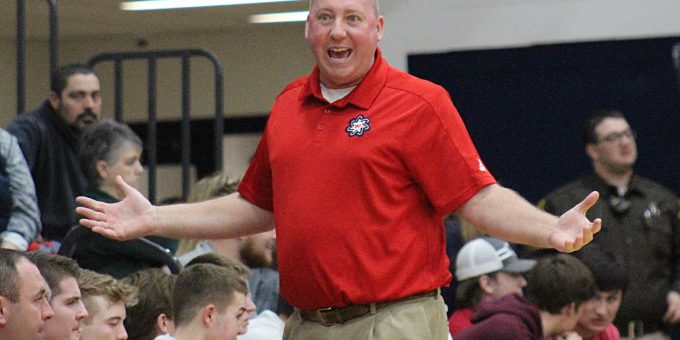 BEDFORD – Coaches fear “trap games” like a Chinese virus. If ever a contest qualified for that label – a road game against a struggling opponent, sandwiched between two emotional battles – Bedford North Lawrence’s next challenge fits the description perfectly.

The Stars, coming off the emotional home farewell for their seniors, with a gigantic Hoosier Hills Conference game looming next week, are prime candidates for a potential mental letdown as they prepare for Friday night’s journey to Brownstown.

BNL (13-8) has been terrific of late, winning six straight, its longest streak since an 11-game run late in the 2010-11 campaign. The Braves (6-12) have scuffled this year, a rare occurrence during Dave Benter’s tenure as head coach, after replacing all five starters from last season. Those are danger signs. Can the Stars stay focused and sharp?

”We’ll find out,” BNL coach Jeff Hein said. “It’s a tough place to play. We have to go to work. It’s the next game.

“If we continue to defend like we have been, I like our chances. It should be a constant. We’ve also executed well offensively, so if we continue to do those things, we’ll stay sharp. We’ve got a good streak going.”

BNL has been exceptional in key areas during the recent run, surrendering only 42.3 points per game, allowing opponents to shoot only 43 percent, and keeping turnovers in single digits. That’s a formula for success.

Brayton Bailey is the driving force, averaging team highs of 20.6 points, 7.8 rebounds and 5.4 assists. Those are All-State numbers. He’s getting plenty of support from different teammates on different nights, whether it be Kooper Staley (8.2), Jackson Miracle (6.3) or Ben Cosner (6.2).

“Bedford is playing really well right now,” Benter said. “They have a great player, complemented by really good shooters and guys who know their roles. They take care of the ball and defend.”

The Braves, after losing all its experience and firepower from a squad that went 18-6 a year ago, got off to a slow start, sliding to 1-7. The recovery from that has been slow, but several quality games (including an overtime win over Columbus East) got Hein’s attention.

“They’ve not won as many games as their past teams have, but they’re starting to play better,” Hein said. “They’ve started to hit their stride.”

“We are playing better,” Benter said. “We have defended and rebounded well, we are just struggling taking care of the basketball.”

Brownstown will need a serious late charge to avoid its first losing season since 2000-01.

Last meeting: Last year at BNL, the Stars rallied in fourth quarter for a 64-60 victory. Brayton Bailey had 27 points and sparked a key 16-4 run in the fourth quarter. Isaac Johnson had 19 points for the Braves.