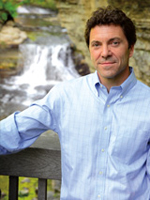 “I want to thank Cam for leading one of our state’s largest agencies with great dedication,” Gov. Holcomb said. “He has faithfully served Hoosiers by ensuring our state parks and recreation areas offer incredible experiences for decades to come.”

Clark was appointed as the director of the DNR in 2013 by then-Gov. Mike Pence and reappointed by Gov. Holcomb in 2017. As the director, Clark stewards more than 500,000 acres of land and water. Since 2013, he has protected 6,700 acres in 39 new nature preserves, including the J.D. Marshall Nature Preserve – the state’s only underwater nature preserve. Clark has overseen the development of Gov. Holcomb’s Next Level Trails program, the largest infusion of trail funding in state history with $90 million dedicated to connecting communities through more hiking, biking, and riding trails.

Clark was promoted to director after two years as DNR’s chief legal counsel. Prior to that, he worked in private practice. Clark earned a law degree from Indiana University and an undergraduate degree from Vanderbilt University.

The Department of Natural Resources state parks, reservoirs and nature preserves host tens of millions of guests each year. The agency is also charged with regulatory responsibility for wildlife, and our land and water resources.