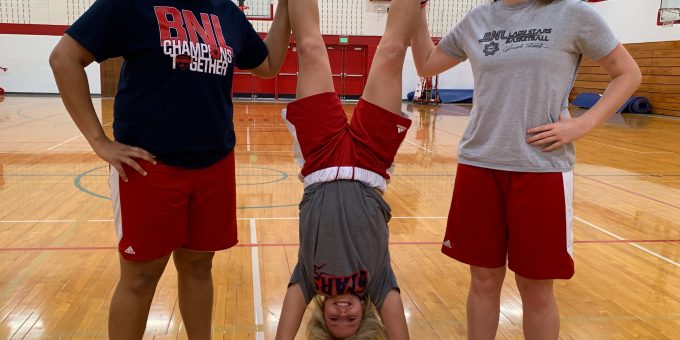 BEDFORD – Seniors come in all shapes and sizes, and no collection is more diverse than the trio about to bid farewell to Bedford North Lawrence. One size cannot fit all for Gracie Crulo-Rood, Madison Webb and Peyton Sweet.

The leader. The quiet one. The life of the party. Each has a uniqueness, a distinctive personality, a special gift. Together, they set the tone for the Stars, sacrificing body parts and the spotlight for others to excel.

Yet for all the differences, they share a bond. The term Lady Stars is one of esteem, weighted with expectations of excellence. To reach the end, the final home game in BNL Fieldhouse after four exciting, intense, passionate seasons, they’ve earned the badge of honor.

GCR, Webb and Sweet will be honored on Saturday afternoon when the Stars (15-5) face Terre Haute North (9-12). The emotional goodbyes will strike a chord with each, for various reasons. BNL basketball has been the bulk of their lives, and now the finish line is near.

“It’s kind of crazy,” Crulo-Rood said. “When people say time flies, they actually mean it. It’s pretty sad, I’m not ready for it to be over.”

“The common thing they have is character,” BNL coach Jeff Allen said. “All three are great character kids, good teammates, they exemplify what we talk about our girls to be like. They’re great in the social community, good at school, good with their peers, and they do their best when they’re on the floor. We’re definitely attached to those three, and they’ve been a big part of what we’ve done.”

What have they done? Win, for starters. BNL has gone 82-21 during their high school careers, claiming a sectional championship every year, and a regional two seasons ago.

How have they done it? Toughness. Webb missed her freshman season with a knee injury, suffered tweaks to it the last two years, and charged ahead. Sweet went down with a shoulder issue last year. Crulo-Rood is the personification of grit on the floor, willing to defend the opposition’s best every night.

“Both those kids (Webb and Sweet) have had their share of tough times in high school, and both have had their shining moments,” Allen said. “Maddie has had some great postseason games, Peyton did a great job of stepping up and filling in when Madison was out. They’ve both grown as players and people.

“Gracie mirrors how I want us to play. Her personality and game have evolved. She’s a much better ballhandler, she really understands what we’re trying to get done. She’s take the leadership role, she’s become more vocal. When she’s out there, the other kids feel like they have a leader and a warrior, someone they want to follow.”

Webb, who will play college basketball at Southern Illinois Edwardsville, is averaging 12.5 points and 5.9 rebounds. She had a career-high 23 points at North Harrison. One of her best games was the 20-point, 14-rebound effort against Warren Central in the 2018 semistate, and she was a double-double machine in last year’s state tournament. She’s always the first in the gym on game day. For her, the hours and healing have been worth it.

”It’s been tough, but I had some really good teammates to get me through it,” Webb said. “They kept me involved, they’ve kept my spirits up. So this is sad for me. I’ve played with them for so long. It will be a lot different next year.”

Sweet almost forfeited this moment. She decided to walk away after last season, but something brought her back. When practice started in October, she returned to the fold. And she’s glad she made that choice.

”For me, I have a whirlwind of emotions,” Sweet said. “I wasn’t sure I was going to play my junior year or senior year, but leaving was one of the biggest regrets I would have had. So coming back, Saturday will mean a lot.

“Not playing with them would not have felt right, it wouldn’t have felt complete. I had to finish.”

BNL certainly needed her. When Webb missed games early this season, Sweet stepped in the void, and the Stars went undefeated in Webb’s absence.

Crulo-Rood is the attitude catalyst, always smiling, always complaining that pictures from game action show her in awkward poses or facial expressions. But that’s the way she plays, with exuberance and joy. She loves the crowd, especially those who are fixtures over the years, and they have adopted her as one of the favorites, imploring her to shoot when opponents show her little respect for her offensive skills (2.9 points per game).

Her unforgettable moment? A pregame dance-off with girls from Indianapolis Attucks. That’s how much fun she has on the court.

And now the countdown is on. After the traditional farewell and the regular-season finale, the next loss will be the last. Hopefully more memories are in store, although they’ve made many already.

“It’s the bus rides, it‘s singing and laughing,” Sweet said, “the memories with friends you’ll never get back.”