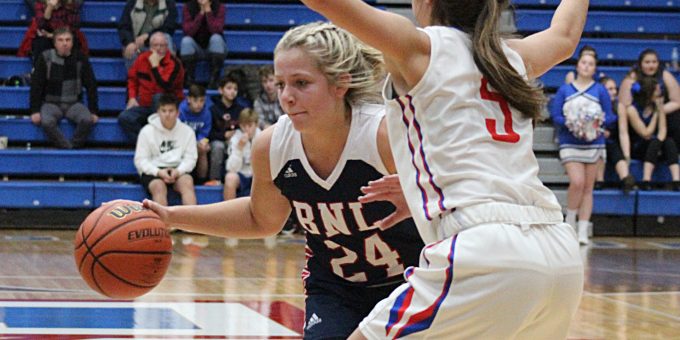 BEDFORD – Gracie Crulo-Rood has heard the stories, the tales of yesteryear, when the legend of Bedford North Lawrence basketball was cast long before she was born.

The great teams, the state championships, the three consecutive Mental Attitude Award winners. Everything linked to the tradition of BNL centers on the coach, the bear of a man who towered over his kids and demanded their best. Austin “Pete” Pritchett, who shares a birthday with the first president of the United States, is The Godfather of the Stars.

Now, thanks to a generous gift from the Indiana Basketball Hall of Fame, Crulo-Rood will have a connection to that past to cherish as she pursues her career goals. She will get a gift she won’t refuse.

On Saturday afternoon, as BNL hosts Hoosier Hills Conference rival Floyd Central, Crulo-Rood will receive a Gifts of the Game college scholarship, in honor of Pritchett, from the Hall of Fame. She will use the $4,000 award to fulfill her dream of becoming a special-needs teacher as she attends Indiana University Southeast in New Albany.

Crulo-Rood will be one of four athletes across Indiana to receive the scholarship. The program was funded by an unnamed Hall of Fame inductee “who holds a firm belief in the foundation that participating in high school athletics paved the way for their college, professional and life successes.”

How appropriate for Crulo-Rood, who would have fit the Pritchett framework as a tenacious blonde guard (in the Carrie Mount mold) who is willing to sacrifice herself for team success, to be the recipient.

“It means a lot to me because my coaches respect me as a player,” Crulo-Rood said. “It’s an awesome opportunity. And it’s pretty cool to be mentioned with the teams from the past, something you always look forward to. You always hear stories about that, so it’s cool to be a part of that.”

Crulo-Rood, in addition to her role as a starting point guard for the Stars, wears several hats. She runs track, she is president of Champions Together, participates in the Special Olympics program (which inspired her career choice), plus she’s a member of Beta Club and Key Club.

“We’ve had numerous kids, not only quality players but high-caliber individuals, come through here, Gracie being one of those,” BNL coach Jeff Allen said. “The legacy of Pete Pritchett, and the tradition of Lady Stars basketball, that speaks for itself. To pass that on to Gracie for the four years of hard work she put in here, it’s outstanding.”

His Stars also set records for winning streaks (55 straight) and regular-season wins (89) over a four-year span. He guided the Indiana All-Stars in 1985. Adding his name to this scholarship was another unexpected, but deserved, career tribute.

“Very honored. Very, very honored,” Pritchett said. “That’s something unbelievable. I never even thought I would be in the Hall of Fame. Somehow, the kids put me there.”

While Pritchett’s health won’t permit him to attend the game and help present the scholarship, he approves of the honoree. He would have appreciated her spunk on the court.

“From a coaching standpoint, she’s like a sponge when you talk to her,” Allen said. “She‘s a high-effort kid, she wants kids to like her and follow her, so she’s been a great leader.”