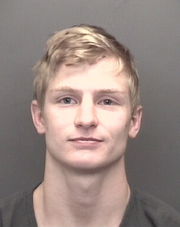 (EVANSVILLE) – An Indiana University wrestler celebrating his 21st birthday ended the night in jail after police said he was found urinating in public and then soiled himself during a brief struggle.

Officers were called to the Thorntons gas station on North St. Joseph Avenue after a report of a person down on the ground.

According to officers with the Evansville Police Department, they found Luigs staggering and urinating in the grass. He then ran off when an officer told him to stop. He was tackled by another officer and placed into custody after a brief struggle.

Luigs told police he soiled himself during the fight. He said he’d been drinking all night to celebrate his 21st birthday.

He was booked into Vanderburgh County’s jail around 2:45 a.m and was released shortly before 11:45 a.m. after posting a $200 bond.

“Indiana University Athletics and the IU wrestling program are aware of the incident involving Kyle Luigs, a member of the wrestling team. IU Athletics will continue to gather facts, cooperate with and monitor the legal process, and take further action as the evolving situation warrants.”