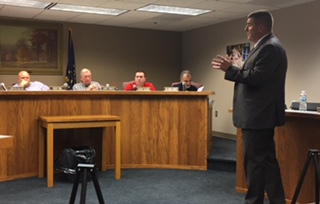 (BEDFORD) – After an almost three hour meeting on Monday, Bedford North Lawrence school board members remained with unanswered questions and a lot of data and information to scour over before this Thursday.

The Facebook live presentation that was to occur on Monday night didn’t work, so those who could not attend the meeting and wanted to watch the live feed were unable to.

At this point, the board is still considering the proposals and trying to get answers to questions before making this huge decision.

Dr. Ty Mungle provided the members with data, but throughout the meeting, some of those numbers were either inaccurate or incomplete, leaving school board members with unanswered questions.

The public was not allowed to engage with the school board members, but many did clap or try to ask questions during the meeting. Several times throughout the meeting Vice President Dr. Kamal Girgis asked the public to refrain from public outbursts.

Dr. Mungle says the proposed consolidation will require some construction work at the Bedford Middle School and it will take at least 16 weeks before plans on renovations could be completed. The annex building across the street from the middle school will also need to be renovated.

The building of a new middle school and a large career center are plans for the future. The savings from the school closings will help pay for these future capital projects.

Transportation of the students and parking issues at Bedford Middle School are concerns that were expressed by the school board members. Currently, parents park on 15th Street where no traffic can get through during the morning drop off and afternoon dismissals. Adding more students to the area is seen as a major safety concern. When board member Rusty Garrison stated this, the crowd clapped.