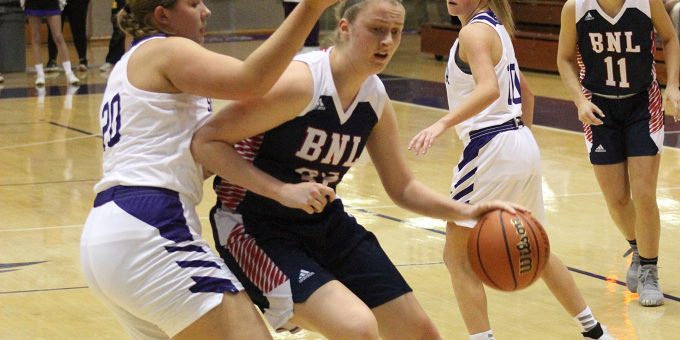 (BEDFORD) – Bedford North Lawrence, no stranger to elite competition and extreme challenges, will face its toughest test of the season on Saturday afternoon.

The Stars, 7-3 with four consecutive wins, will burst across the state border to clash with Ohio superpower Mount Notre Dame, ranked No.8 nationally by one media poll and featuring one of the best sophomores in the nation.

The Cougars (7-0) won last year’s Ohio state championship, and BNL got a first-hand look at how good they were during a 68-47 loss to MND at BNL Fieldhouse. Now the Stars are making the return visit, and they will meet one of the premier players in the class of 2020. K.K. Bransford, a member of last year’s USA U16 team, is ranked the best guard in the country and ninth overall by ESPN.

Factor in senior guard Makira Cook, who is destined for Dayton, and BNL is likely facing the best high school backcourt anywhere.

“They’re very talented, they’re athletic, they bring run-and-jump pressure, which is something we’ve struggled with,” BNL coach Jeff Allen said. “So for me, it’s a great chance for us to go over there and have a great day of learning.

“We’ll go over to compete, with the intention of winning, but it’s a high-level basketball team with some really good players. We’ll have to improvise, outsmart them a little bit. If we play hard, I think we’ll compete.”

Bransford is averaging 23.3 points and 6.7 rebounds, while Cook is totaling 18.7 points and 3.6 assists. They played secondary roles last season (Bransford had 13 and Cook 10) as Iowa recruit Gabbie Marshall blitzed the Stars with 7 treys and 27 points, but now they’re the stars on a star-studded team that averages 65.3 points, 32.6 rebounds and 8 steals per game.

Notre Dame coach Scott Rogers, a dentist by day and a coaching veteran after office hours, loves the attitude and work ethic of his young phenom.

“She’s like anybody that plays at high level, she’s not satisfied with any part of her game,” Rogers said. “She‘s always wanting to work at something. She’s a coach’s dream. She has an enormous amount of talent, but she always gets the big picture part, especially for being so young.”

Last year’s Notre Dame team was impressive, one of the best opponents BNL has faced in terms of talent, skill and quality of play. Pitting that group against the BNL championship teams of 2013-14 would have been something special. And Notre Dame might have another such collection.

“I can only tell you that every team we’ve had tries to peak at the right time,” Rogers said. “Sometimes it works out, sometimes it doesn’t. This is a focused group. Even though we lost two great players, we have kids that have stepped in and are really playing well.

“We have an enormous amount of respect for BNL and their coach. We enjoyed coming over there so much. The fans were great, they love basketball, we were treated extremely well, and that’s what we’re about.”

“You want to see what you can do against somebody that talented,” Allen said. “If we can take care of the basketball, keep them off the boards, we’ll be able to compete. If we don’t, we’ll struggle. We want to get better, and this is the chance to do that against somebody really good.”

Last meeting: Last year at BNL, the Cougars rolled to a 68-47 victory as Iowa recruit Gabbie Marshall poured in seven 3-pointers and totaled 27 points. Jorie Allen had 20 points (and broke the school’s career scoring record) for the Stars.

Game notes: Mount Notre Dame, the defending state champion in Ohio, is ranked No.8 nationally by the Xcellent 25 media poll.