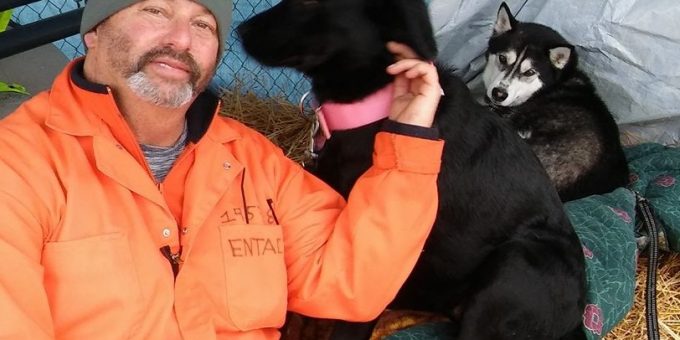 (BEDFORD) – The public has rescued Robin Compton and his canine companions and they are out of the cold.

Compton reached his goal and raised more than $10,000 for the White River Humane Society. That goal was reached this afternoon. He began his adventure Saturday night at the Bedford Christmas parade and spent the last four nights in the cold with his beloved dogs Mischka and Rexie.

Five Years ago Robin Compton created Rescue Robin – each year Compton spent a weekend inside a kennel outside of Tractor Supply with his two dogs to raise money for the White River Humane Society.

This year Compton’s goal was to raise $10,000 or spend 10 days living outside in Indiana’s unpredictable weather with his dogs.

This year Compton and his canine companions began their adventure in a trailer provided by Roots RV Sales. That way he can move from location to location.

If you want to donate visit the White River Humane Society on Facebook, or stop by the shelter on Pumphouse Road or visit their website at whiteriverhumanesociety.org.