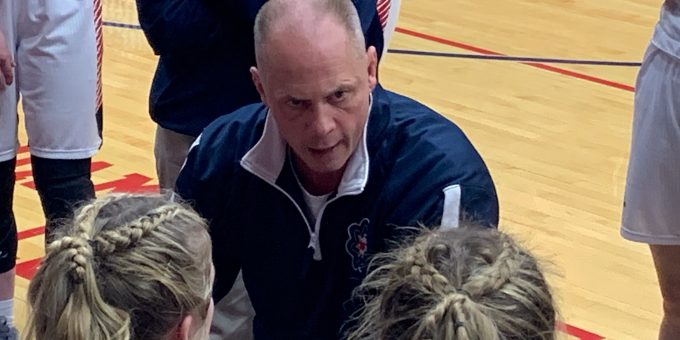 (BEDFORD) – Lest anyone forget, and Bedford North Lawrence coach Jeff Allen certainly has not, going on the road in the Hoosier Hills Conference – even as an overwhelming favorite – is not a foregone conclusion.

As the Stars, definitely a team trending upward, prepared for their trip to Seymour, their third straight league road game, Allen mentioned in passing last year’s inexplicable loss at Floyd Central, one that cost BNL the outright conference title.

The lesson? Don’t overlook anyone, at any time, especially a member of one of Indiana’s toughest conferences.

BNL (6-3 with three straight wins, 2-1 in the league) will challenge the Owls (3-5, 1-0 in the HHC after a 67-59 victory at Jennings County) on Thursday night. The Stars, ranked 11th in the state on the Sagarin computer, have won four straight in the series.

“They’re not going to be afraid to play us,” he said. “We can’t take anyone in the conference lightly. What happened to us last year? We had an away game, didn’t play well and ended up with a loss.

“We’re going to be focused. It doesn’t matter who we play right now, we’re not good enough not to be. We have to be focused. When we are, I think we’re pretty good.”

BNL has been very good of late, notably correcting the parts that plagued them. Rebounding was lacking, and junior wing Chloe McKnight has waded into the fray, averaging 8 per game the last three. Turnovers were obvious, and the Stars have had only 8 each of the last two outings.

Shooting was suspect, and BNL’s Red Rider snipers (McKnight and Irye Gomez) combined to hit 7 of 8 treys to shoot New Albany’s eyes out last week. When BNL gets three consistent scoring weapons, it will be extremely dangerous.

“We’ve done a good job of that,” Allen said. “We’re getting better in that category. We felt it was coming, even in the games we lost. We were moving in the direction of getting better.”

The Owls were struggling on the offensive end, averaging only 43 points per game overall and only 36.3 per game during the recent slump before ending that against the Panthers. They’ve had other glimpses of excellence – early leads against Bloomington South and Brownstown – that ended in double-digit losses.

While Seymour will depend on junior forward Grace Meyer (who had 12 points against BNL a year ago) for firepower, BNL is going to attack with pressure from the backcourt. The Stars are averaging 10 steals per game, forcing 19.7 turnovers per outing.

“That’s going to be the case, because those kids can,” Allen said. “We feel like our defense and rebounding are the keys for us, and that will continue to be the focus. It play at a high level, we have the offensive capability, but we have to get stops.

“In our conference, on the road, you have to get off to a good start and be able to defend and rebound.”

Last meeting: Last year at BNL, the Stars prevailed 54-33 as Jorie Allen scored 20 points. Grave Meyer and Makenna Fee had 12 points each for the Owls.

Game notes: BNL has won four straight in the series. Seymour ended a three-game skid with a road triumph at Jennings County on Tuesday.