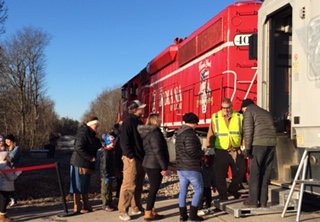 (SOLSBERRY) – Santa contacted the Indiana Rail Road Company from the North Pole and asked to visit the children in Solesberry, by train to give his reindeer some rest.

The train carrying Santa and Mrs. Claus stopped at the Yohoo Store in Solesberry from 8:30 a.m. to about 10:30 a.m. before continuing on to Bloomfield.

The children were not disappointed as they visited with many characters from cartoons, to Sparky the Fire Dog, while they waited to board the train to see Santa. Santa handed out gifts and a treat bag to the children as they told Santa their wishes for this year’s Christmas.

The Eastern-Greene Fire Department had the street around the Yohoo Store blocked for safety as several hundred children made their way to visit Santa.

This year will mark the 30th year that Indiana Rail Road brought Santa to the communities along the rail line in Indiana and then Illinois.

After visiting Santa many made their way to the Tulip Trestle were Santa would be crossing on his journey to Bloomfield. The community around Solesberry also put some effort into an observation deck to view the viaduct and possibly see a train. One guaranteed time to see a train is when Santa comes every year to visit.

Officials began talks in 2014 to build the deck and in 2015 began collection donations and with volunteers doing the labor the project was completed.

People who attended came from all around including Harry and Carol Smith from West York, Illinois.

“We come over a lot,” said Harry who is a railroad buff. “I attended college at Southern Illinois University and rode the train back and forth to attend college. I even got to ride to the City of New Orleans.”

This year’s event will mark the 4th year of having the community come together. A meal of ham & beans and cornbread, hot chocolate, and all kinds of cookies were provided. Everything is free

One of the other features of the Observation Deck is a free library provided by the Greene County Literacy Coalition. So far, there are more than 40,000 people that have used the free library. This location is one of Greene Counties’ busiest locations

The Coalition provided children with a gift when they stopped by Saturday. And there was a drawing for other gifts.

Around 10:30 a.m. you could hear the train whistle as it started towards the Viaduct and many started lining up on the deck as well as the property below.

As the train neared the viaduct the engineer on today’s train Pete Jeperson sounded the horn to acknowledge the children below as well as used his bells as it journeyed across the trestle.

Santa waved at the children from the rear of the lead engine as he crossed over heading to Bloomfield. The children waved back to Santa and his Elf who was also outside waving from the rear passenger car.

Those attending today got some great news from the president of the group Malea Huffman who informed them they no longer lease the property the viaduct sits on, but they now own it.

“We have the option to buy the additional property that leads up to the Viaduct from the property owners. And our vision is also to put in a visitor’s center at the property ” Huffman added. “We are working with Indiana University’s Sustaining Hoosier Communities in drawing up plans for the center. Indiana Unversity students will be drafting interior designs for classrooms for school children to use for Conservation and History something our group supports.”