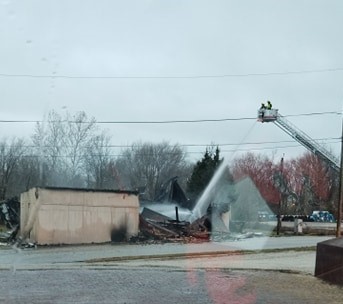 (BEDFORD) – A fire early this morning destroyed the Hideaway at 1021 J Street.

Bedford Fire Department firefighters were alerted to the blaze at 2:35 a.m.

Nine firefighters from stations 1,2, and 3 responded with two engines, 1 rescue engine, and their ladder truck.

“The fire was under control by 4:30 a.m.,” says Fire Chief DeWayne Turpen. “The business was closed when firefighters arrived. The fire was contained to the structure that the fire originated in and there was no damage to surrounding structures. The structure is a total loss. The fire investigation will begin later this morning.”

Firefighters were still on the scene this morning.