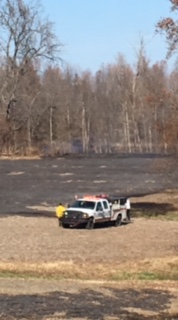 The blaze started from an attended brush pile that was being burned, and the wind carried embers and sparks into the field.

Pleasant Run firefighters were able to keep the fire from spreading to near-by woods.

The department responded with two brush rigs and a tanker, in addition to eight firefighters.

Shawswick Volunteer Fire Department was also responded to the scene with an additional brush rig but was canceled en route as Pleasant Run firefighters were able to stop the blaze from getting into the woods.

Firefighters were on scene for some time to make sure several hot spots were extinguished.

Temperatures were at 63 degrees with strong winds coming from the south which pushed the fire quickly across the field.