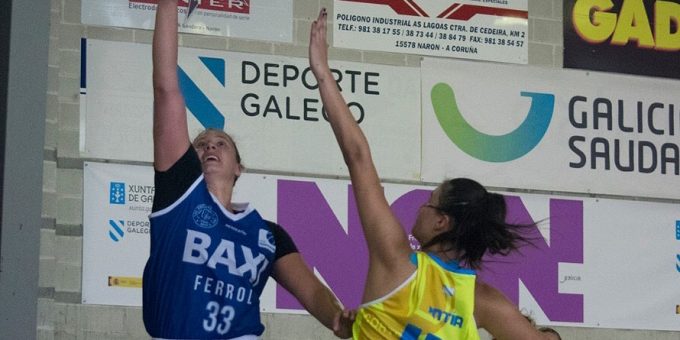 (FERROL, Spain) – Late in the Spanish night, when most women her age are enjoying the romantic, relaxed European atmosphere, Jenna Allen is locked in a gymnasium, struggling to understand a coach explaining his directions in a foreign language.

Well, foreign to her, anyway. About now, she regrets not enrolling in that class in high school at Bedford North Lawrence, or at Michigan State, and the two-times-per-week sessions she now takes in her attempt to quickly assimilate are not yet translating.

Yet, like love, basketball is an international language. Baxi Ferrol coach Carles Martinez makes his point, and Allen understands. She’s one of a kind, one of the American girls on the roster, a runaway of the establishment incorporated as she starts her professional career six time zones away from home.

Allen is off to a solid start in the Spanish league, averaging 13.4 points, 9.2 rebounds and shooting 60 percent from the field for a team that’s a respectable 3-2 – already matching last year’s win total. And she’s loving every minute of it. Except for the part where her cell phone got stolen. Everything else thus far has been a wonder-years dream tour.

“I love it,” Allen said, taking a break from two-a-day practice sessions for a FaceTime connection. “The people are really nice, the city is beautiful. It’s been awesome. I’m enjoying the people, the different culture. Spain is a beautiful country and I’ve got to see a lot of things.

“I’m such a homebody, I love my family. So it’s been a challenge to be away, but I really haven’t been homesick. Everything is new, and exciting, and there’s so much to do.”

There’s been cultural adjustments, lifestyle shifts for the former BNL star (the centerpiece of two Class 4A state titles and the career rebounding leader) and Spartan standout. She chose this path, after going undrafted by the WNBA, as the best way to the big time. Good decision? So far, absolutely.

Basketball is the easy part. Allen is playing the 4 spot, given her freedom to shoot from outside (36 percent from that line) and power in the post. Even the language barrier has not been too difficult, with another American teammate (Macy Miller) and two others who went to college in the United States on the roster. Allen isn’t ready for a fluent conversation in Spanish, but she has picked up enough, words like ayuda (for ‘help’) and cambiar (for ‘switch’) to know what is going on.

“It’s basketball, it’s a universal language,” Allen said. “Sometimes it’s hard to understand what he’s trying to get across, but usually he speaks and shows us at the same time. We all speak the game of basketball, so it’s been easier for us to understand him on the court.

“I feel really good playing. I really like our offense. As as team, I don’t think we’ve reached our full potential yet, and it’s hard to do that because we’re bringing players together who have never played with each other. We’re still trying to figure out each other.”

Off the court, Allen is figuring it out. It’s another world.

Ferrol is a city of 70,000 on the northwest Atlantic coast of the country, known for its beach, its ancient San Felipe castle, its metropolitan style, parks and museums, restaurants featuring fresh seafood. Adjustment 1: people walk. Everywhere. To everything.

“When I first got over here, we were a little shell shocked,” Allen said. “Everything is so close that we can walk to everything – the grocery store, the movie theatre, the beach, the gym. Back in the states, to go anywhere, you get in the car. So it’s actually really nice.

“Going to get coffee is huge over here. Spanish people don’t eat breakfast, but they go get coffee in the morning. Then they eat from 2-4 in the afternoon, and from 4-6 they have the siesta. So everything closes down. We’re used to having dinner at 6 p.m., and everyone is just then waking up and alive again.

“I didn’t know what to expect. When we’re walking around, people just stare at us. But for some reason they know we’re American, they know we play for the club team, so they come up and speak to us. It’s really nice.”

Allen’s Spanish is good enough to order coffee, so she can survive.

“The time change was the hardest part. I usually don’t go to bed into 2-3 a.m. now because I’m still six hours ahead.”

Adjustment 3: no phone. Oh my goodness, how does a millennial survive without a cell phone? Allen lost hers when a burglar broke into the locker room during a road trip and took the entire team’s phone collection. Welcome to life in 1985, before everyone had sore thumbs. She will eventually get another, but going back in time has its advantages.

“It’s been kind of nice, because my generation of people is always on our phones,” Allen said. “It’s made me do things like read, and go see stuff. Now I’m kind of used to it.”

Allen will be home for Christmas, in time to see little sister Jorie play for Indiana University against Michigan State (don’t ask which jersey older sister will be wearing). Otherwise, she will watch Jorie on the Big Ten Network and track her father’s BNL team. She will be in Spain until the season ends in April.