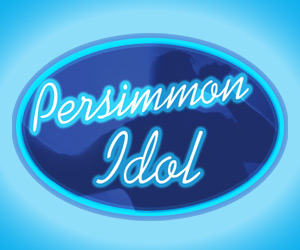 Taking home the Litefm Persimmon Idol trophy and $300 cash prize in the adult division were Adrienne Anderson and Natalie Lake of Bedford. Their voices and amazing guitar skills shined while performing “Dancing on My Own”.

Taking the title in the youth division was Lily Bochting of Mitchell who sang Katy Perry’s “Roar”. She also received a trophy and $300 in cash.

Contestants from Bedford, French Lick, Guthrie, Paoli, and Salem participated in the competition. Their voices and performances did not disappoint the crowd.

For some performing in front of a crowd was nothing new. For others it was their first time.

“I like to be in music, as well as sports,” said 15-year-old Jimmy Gibson, of Salem. “I am part of football and wrestling. I have performed before among crowds. I perform country, pop, and soul.”

“I love to perform,” Crabtree said.

Earlier this week Crabtree performed an original song on the Evansville television station WEHT. Crabtree both writes songs and sings.

“I hope to record music,” Crabtree concluded. The crowd joined in on the chorus, rocking to the country song.

Karston Brim, of Guthrie, who is a familiar face around Lawrence County, says he normally does not perform in front of crowds this large.

Brim performs on Facebook and local churches. He played his guitar and sang “Beautiful Crazy”, a Luke Combs hit.

Lily Bochting, of Mitchell, started off the youth category and ended up claiming the title with Katy Perry’s “Roar”. Her parent’s brought a sign to show their love and support to their star.

One of the judges commented, “This was a big song for such a small lady, and the finish was awesome.”

Adrienne Anderson and Natalie Lake of Bedford were the winners of the adult contest with the two using great harmony and amazing guitar skills while performing “Dancing on My Own”.

The evening was perfect, with great weather and music… overall a fun entertaining evening for those attending.