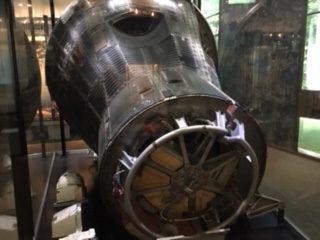 (MITCHELL) – With Saturday being the 50th Anniversary of the Landing on the Moon on July 20, 1969, many throughout the United States came to Mitchell, Indiana to tour the Gus Grissom Memorial at Spring Mill State Park.

Some of the visitors came as far away as Oklahoma, Texas, Ohio, and California.

At 2 p.m. the adults and kids both got in the act of making rockets out of water bottles; not only to see how far it could go up but to also cool off a little on the extremely hot day.

Ava Morris, 5, came to be part of the festivities from Indianapolis, Indiana wearing a spacesuit, and proclaiming that “Gus” Grissom was her hero. Many of the tourists also commented on what the space program meant to them.

With the Apollo landing on the moon, it is important to reflect on the past, and the history that surrounds one of our own Virgil “Gus” Grissom.

Virgil Grissom was born April 3, 1926 in Mitchell, Indiana as the oldest of four children. Grissom was a 1944 graduate of Mitchell High School. Following high school, he entered the U.S. Army Corps. of Engineers where he was inducted into the Air Corps in August of 1944.

Grissom went on to study at Purdue University graduating in 1950, with a degree in Mechanical Engineering. He joined the United States Air Force and in December of 1951, he was in the Korean War.

Grissom flew more than 100 missions in Korea, in less than six months. He received the Distinguished Flying Cross and the Air Medal.

After returning from Korea he was sent to Wright-Patterson Air Force Base near Dayton, Ohio and then transferred to Test Pilot School at Edwards Air Force Base in California.

In April of 1959, the National Air And Space Administration announced the selection of the country’s first seven astronauts. Virgil L. “Gus” Grissom being part of the group that would be come known as the “Mercury 7”.

Following Liberty Bell Grissom’s next assignment was to oversee the design and then to command the first manned mission of the Gemini program. The goal was to launch a two-man spacecraft designed to maneuver and work in space and to test plans, techniques, and equipment needed for a landing on the moon.

On March 23, 1965, the Gemini III was launched with Grissom at the helm, in a capsule he christened Molly Brown.

The Molly Brown flight lasted approximately five hours and flew nearly 1,000 miles around the earth, completing three orbits. This was another historical event as Grissom was the first person to control and change the path of a spacecraft in orbit.

In reaching for the moon, the final steps needed to prepare for a successful manned lunar landing were undertaken during the Apollo program. The ultimate goal of Apollo was to launch a spacecraft on a path to the moon, using weak lunar gravity to slingshot the spacecraft to the moon and back to earth.

During February 1966, Virgil L. Grissom, Ed White, and Roger Chaffee were chosen as the crew of the Apollo I mission.

On the fateful day of January 27, 1967 during a test on the launch pad, a flash fire broke out inside the command module. Grissom and the other two astronauts were trapped inside and unable to escape the blaze.

The celebrations of the moon landing celebrate the history of such an amazing feat, and for a man from Mitchell, Indiana to be part of that. Lawrence County natives must continue to keep the memory of Gus Grissom alive as well as his contribution to the United States Space Program.

“If we fall, let the world know that we died as test pilots in the risky business of exploring outer space,” said Grissom.