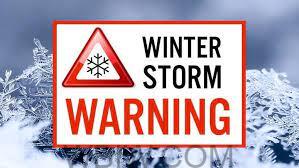 INDIANA – A winter storm warning has been issued for Wednesday from 1 a.m. until 7 p.m.

The rest of the state is under a winter weather advisory. This all means that slick roads are likely throughout the storm.

Beginning tonight, clouds thicken and a rain/snow mix begins to fall after midnight. Eventually, turning to all snow after 2 a.m. with some accumulation on the ground.

Interstate roads will likely not see accumulations until much later in the morning as the storm deepens and temperatures slip. Bridges and overpasses will be the first areas to watch for ice before sunrise.

The storm will begin to intensify by mid-morning Wednesday from south to north and angle to the northeast. This will create higher snow totals in parts of central Indiana.

This will be heavy, wet snow but temperatures will help with roads that have been salted. As of this morning, officials are expecting 5″ to 8″ for central Indiana. Higher totals are likely for the northern and eastern counties.

Additional snow is expected on Thursday bringing additional accumulations in spots, up to 1″, as colder air moves into the area.