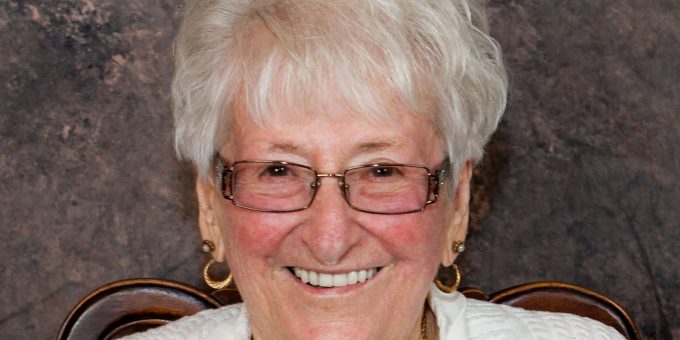 Edna Florence (Hannell) Lindley began her latest adventure on Wednesday, January 18, 2023. She was surrounded by the family she taught to love unconditionally, to laugh until they cry, to cook enough to feed an army and to sing every song (even if no one appreciates your voice).

Edna was born to John William and Lydia Annie (Tyler) Hannell in Kedron, a neighborhood of Brisbane in Queensland, Australia on October 21, 1927. She was the fifth of seven children. By her own reports, she was a good student and a spirited girl her older brother Jack would call “a little devil” even in her 80s.

During World War II, she met Elmer Arthur “Jimmy” Lindley at a Red Cross dance while he was stationed in Brisbane Harbour repairing ships. Not one to follow rules like, “Don’t date the American servicemen,” she said yes when he asked her out. They married on October 28, 1944 – one week after her 17th birthday. Their first daughter Annette was born in May of the following year.

Edna and Annette left Brisbane on May 31, 1946, on the transport ship Mariposa. Edna and her good friend Adele won a jitterbug contest on the ship. The two Aussie girls would end up living about half an hour away from each other, visiting frequently over the years, seeing each other through homesickness and the ups and downs of life. They helped each other keep their Australian accents and shared the tastes of home.

Patricia was born in April after Edna and Jimmy were reunited in West Baden, Indiana. Unlike her sister, Patricia was born at Jimmy’s mother’s house and not in a hospital. Life in rural Indiana was a big adjustment for a city girl and that was just one.

In 1955, Jimmy’s sister Ruth died and the young family welcomed nephew Arlis Lindley Stanfield into their home and hearts. Edna had always wanted a big family and Lindley completed the circle.

When Edna left Australia, she didn’t know how to do three things she became known for: she couldn’t cook, swear, or drink. Somewhere along the way, she took to all three in spectacular fashion.

If you knew Edna, you might have called her Nana. The grandkids started coming in 1970 and she was dubbed Nana. She got used to them introducing her that way. If someone asked if she minded them calling her Nana, she would usually say, “Might as well! There are 70-year-old men who call me Nana.” It was fitting. Knowing what it was like to be far from family, she always made room for anyone who needed a place to be.

Edna’s heart would always be in two places on opposite sides of the world. She always said if she won the lottery (which she never played) she would spend every winter in Australia and every summer in Indiana. Her siblings and their children loved her visits and, after Jimmy’s death in 2001, might have tried to convince her to stay. No one blames them for wanting Auntie Edna (or Big Ed) there, but she always came home to the family in the US.

She loved to travel. In the early 2000s, she learned of the World War II War Brides Association and their annual reunion. She joined and visited several US cities with the War Brides. This group meant so much to her – women who had very similar experiences to her own. They understood each other. Her descendants have been charged with keeping this group alive after the War Brides are gone and we’ll do our best.

She was also a member of the Eastern Star and the American Legion Auxiliary. She was confirmed at St. Andrew’s Church of England in Lutwyche, Queensland. Her capacity to love was endless and she was a very forward-thinker for her time. She embraced everyone who came out to her as lesbian, gay, or transgender. On a trip to Texas, before segregation ended, she sat with her children in the back of the bus on principle.

She enjoyed playing cards and Scrabble, fishing, and bowling. She hated winter and gardening. Her happiest Sundays were those spent with the family and many friends playing bean bag under the shade of the maple tree. She was always happy to be the driver and had no fear except maybe rush hour in Atlanta. It’s rumored that she knew the location of every liquor store between Indianapolis and Louisville. It is not uncommon to hear even distant cousins say that they had their first sip of a wine cooler at her kitchen table.

In her later years, Edna struggled with arthritis, but her mind was sharp. She was more homebound, but kept her car keys and lived in the home she and Jimmy built to the very end. She still enjoyed traveling and lived on her own with the help of #TeamNana. She loved the independence her iPad facilitated. She frequently FaceTimed with family members including her frequent talks with her Aussie nieces Jenni, Lynn, and Judy and nephew Ken.

A party is planned for February 4th at Burtons Farmhouse in Paoli from 2:00 p.m. until 6:00 p.m. There will be a short service around 4:00 p.m. In lieu of flowers, please send donations in Edna’s memory to Middleway House in Bloomington, Indiana, or the charity of your choice. Cresthaven Funeral Home is entrusted with her care.