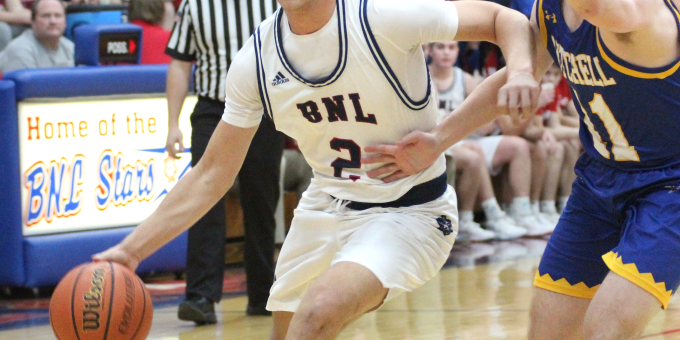 BEDFORD – Statistics, according to former British prime minister Benjamin Disraeli, are one of the three kinds of lies. With modern technology, leading to the “next generation” overload of information, there are stats for everything imaginable. Exit velocity, completion probability, maximum running speed . . . it’s mind numbing and nearing absurdity.

Basketball is not immune to the obsession with numbers. One of the latest evaluation metrics is “points per possession.” How much can a team score compared to how often it has the ball? If the average number of possessions for each team in a high school game is 55, then scoring 55 points should be a minimum goal. Otherwise the efficiency is suffering.

Guess what. When Bedford North Lawrence clashes with Seymour on Friday night, they could crash those computers. Two teams that are quite comfortable with lengthy ball control, quite intent on passing and dribbling the logos off the ball for a quality shot, and quite capable of defending to the point of frustration, will collide in a battle of wills.

Both teams have the earned reputation of the ultra-conservative approach. Remember the Norman Dale demand – “How many times are we gonna pass before we shoot? Four!” – in Hoosiers. That was fictional. This is real life. Don’t expect offensive fireworks. The number of possessions for each team will probably be cut drastically, putting a premium on execution, selection and smarts.

“It will be low possessions,” BNL coach Jeff Hein said. “They work the clock, they play good defense, they’re hard to score on, they’re physical and so well schooled defensively. It turns into a first-team-to-30 game.

“We should be comfortable with that. We just have to stay patient. That’s what we have to be. Make the most of every possession we have.”

The Owls played that to perfection during last year’s skirmish. The Stars scored only seven points in the first half, hit only 9 of 36 shots and suffered a 36-26 loss. Unwatchable? Not for the defensive purist, not for those who appreciate the rewards of extremely hard work on the defensive end. Two years ago, BNL hammered out 44-36 and 52-38 wins that were similar in style.

“We’ve had some rock fights, that’s for sure,” Seymour coach Kirk Manns said. “You just accept it, that it will be a hard-nosed defensive battle. It’s a tempo game. It’s not going to be one of those up-and-down games. You have to keep your composure and poise, not get sped up too much.“

Seymour started the season with unexpected struggles, losing its first six games against a fierce early schedule. Since then, the Owls (now 4-8) have started to fly, and the improvement can be traced to the defensive end. They’ve allowed only 40 points per game during the last five outings. “They’re starting to play well,” Hein said. “Like we are. I feel like we’re playing well.”

“We had some rough patches, had a lot to figure out,” Manns said. “We’re starting to get better now. We’re playing better defensively. We were giving up a lot of points those first five games. We’ve righted that ship.”

Scoring is still mandatory to win, and the Owls have weapons in senior Landon Fritsch (14.0), junior guard Bret Perry (9.0) and sophomore Jaylan Johnson (8.0).

BNL will counter with senior Colten Leach (18.2 points and 10.4 rebounds), with senior guard Colton Staggs (9.8 points) and with potential contributions from either Kaedyn Bennett or Noah Godlevske. Leach was limited to 7 points and added 11 boards during last year’s loss to the Owls.

“He’s a really good player,” Manns said. “He’s a double-double guy, an experienced guy who’s been through it for four years, a hard-nosed kid. He’s always a handful for us. It will be tough playing against him.”

Last meeting: Last year at BNL, the Owls shut down the Stars 36-26. Eli Meyer had 10 points for Seymour. BNL scored only 7 points in the first half and hit 9 of 36 shots.

Game notes: Seymour coach Kirk Manns will be inducted into the Indiana Basketball Hall of Fame on March 22. Manns averaged 34.2 points as a senior at North Judson, scoring 1,962 career points. He was an Indiana All-Star and runner-up for Mr. Basketball, and he played college basketball at Michigan State.