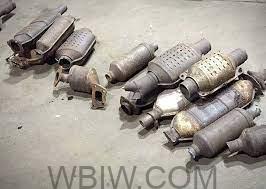 BLOOMINGTON – The Bloomington Police Department is investigating the theft of several catalytic converters.

At 8:40 a.m. on Thursday, November 17th, a woman in the 600 block of West Ninth Street reported hearing noises outside and witnessed a person in a pickup truck outside near her vehicle. She went outside and discovered the catalytic converter had been stolen from her 2006 Toyota Prius.

At 9:15 a.m. that same day a woman reported she woke to something being dragged down her driveway. There was a pickup out front and afterward, she discovered the catalytic converter had been stolen from her 2009 Toyota Prius.

A male later reported the catalytic converter from his 2005 Toyota Prius, in the 1400 block of West 8th Street. He captured the criminals in the act on video surveillance footage.