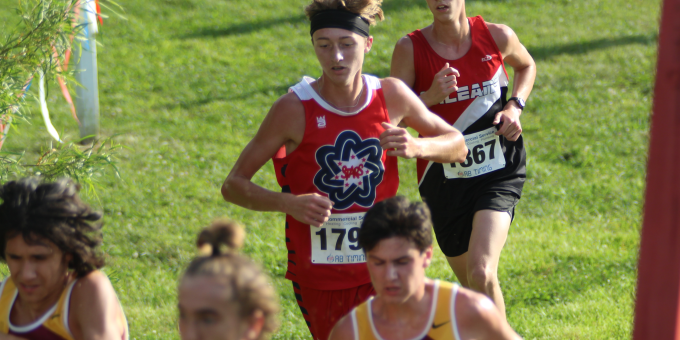 BEDFORD – The powerful thunder of the charge, the released emotional eruption of the attack, the rush of adrenaline fueling the fight for survival. Battle scene from Game of Thrones? It’s the opening minutes of the semistate at Brown County, when 180 competitors take off from the starting line and stampede down the straightaway.

Somewhere in the midst of color, courage and humanity, Bedford North Lawrence’s Jonah Bailey will be a lone bannerman for the Stars, competing in his second straight IHSAA semistate on Saturday while chasing a chance to race in the state championship.

Bailey, after working his way through the sectional and regional with his teammates, will be on his own, and the goal is simple. He must finish among the top 10 finishers (who are not members of the six teams that advance) to qualify for the final stage of the state tournament series. On a flat, fast track, he will need to disregard strategy and shift into superspeed overdrive, covering the 5,000 yards in personal-record time to survive the cut.

“The expectations are to have another best race of the year,” BNL coach Nick Boyd said. “We’re looking forward to seeing times drop, and see what the time brings.”

Against the clock, Bailey has been a consistent machine, normally in the mid-17 minute range during his sophomore campaign. He posted 17:23.22 in the regional at Edgewood. Against this field, featuring qualifiers from four regionals, the last two years the cutline to advance as an individual has been 15:55.5 (20th overall last season) and 16:18.5 (22nd overall in 2020). That means Bailey must slash time.

“Getting out of semistate is really hard,” he said. “I’m trying to PR and run as fast as I can. The goal, and I’ve never done it, is breaking 17 minutes. That would be pretty cool. I think it’s more mental. I’m in pretty good shape, so it’s all mental when you’re on that line and getting ready to go.”

Bailey, a raw rookie a year ago, finished 123rd in 17:31.7 during his first semistate. That was a valuable experience.

“I learned a lot,” Bailey said. “Going into that season, I didn’t know about it. As the season went on, I got more comfortable and got a lot of experience. It helped a lot this year, I’ve already done this before.”

Brown County’s course is all about the calvary-charge start. That wide straight narrows quickly to twists and turns through trees and tight turns, cutting down the passing opportunities until the second pass through the course. Get caught in the backwash, it’s tough to make up ground.

“The first half-mile of the race is essential, to get out and go for it,” Boyd said. “It takes extremely fast times to move on. It lends itself to moving out quickly and setting your position early.”

“The beginning is ready hard because there are so many people and it’s hard to move around,” Bailey said. “Once you get in about a mile, it’s easier to pass. I try to pass as many as I can.”

The IHSAA state finals are scheduled for the LaVern Gibson Championship Course in Terre Haute on Oct. 29.