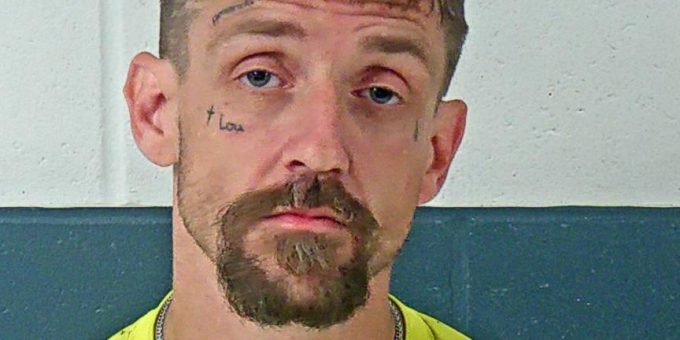 HURON – A Mitchell man was arrested on drug charges this morning after Lawrence County Central dispatch received a report at 1:15 a.m. from an off-duty Huron Volunteer Fire Department firefighter that there was a man sitting in his driveway in a vehicle on Huron Williams Road.

The caller reported the man was sitting in the driver’s seat and had possibly overdosed.

When police arrived the firefighter told police he had spoken to the male several times but the male kept dozing off and on while speaking to him.

An officer walked up to the vehicle and found 37-year-old Spencer Clark slumped over the steering wheel with the vehicle running.

The officer woke the male and asked him to shut off the engine.

The officer asked Clark if he knew where he was and he said “just on the outskirts of Mitchell”.

Police say Clark seemed confused and couldn’t tell officers why he was parked in the firefighter’s driveway.

In plain view, an officer found a small corner baggie that contained Colozpam and a putty substance that tested positive for Fentanyl.

Clark was asked to step out of the vehicle. Police say Clark’s speech was slurred. “He was mumbling his words and was not making much sense as to how or why he was at someone’s residence sitting in their driveway,’ the officer wrote in the probable cause affidavit.

Clark then stated, “he was tired and that he was been working for two days, but then said he was not employed.”

The firefighter had called EMS and they arrived on the scene and medically cleared Clark who was then transported to jail on charges of possession of a narcotic drug, and possession of a controlled substance.

Clark’s vehicle was towed from the scene.