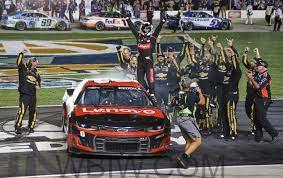 FORT WORTH, TX. – Tyler Reddick of Richard Childress Racing (Chevrolet) found the checkers Sunday to win the AutoTrader EchoPark Automotive 500 at Texas Motor Speedway in Fort Worth, Texas. His margin over second-place Joey Logano was 1.190 seconds.

A multitude of blown tires, plus a nearly one-hour rain delay on a long day-into-night in the hot Lone Star State, hampered the racing at TMS, which set a new record with 16 cautions.

“The first 90 percent of the race we were struggling,” said Chase Briscoe, driver of the No. 14 Rush Truck Centers / Cummins Ford Mustang. “We couldn’t get the balance of the car right. We would be too loose or too tight and could never find where we needed to be. After that red flag, I think the nighttime coming in kind of helped us a bit. With 80 to go, we were hoping to catch more cautions and make it on fuel and we were able to get our track position that way and it ended up working out. We did what we needed to do for our Rush Truck Centers/Cummins Ford. We were not a fifth-place car. We weren’t even a 15th-place car. To steal some points like that is huge. Going to Talladega, we are not in a massive hole and that is the most important thing. We will go there and, hopefully, have a little luck go our way and see what happens.”

There were 16 caution periods for a total of 91 laps. Twenty-five of the 36 drivers in the AutoTrader EchoPark Automotive 500 finished on the lead lap.

Christopher Bell was the first playoff contender to have problems in the 334-lap race when he cut a right rear tire on Lap 78 to bring out the fourth caution period.

Championship competitor Alex Bowman, running in the top 10, soon followed suit on Lap 97, losing control of his No. 48 Chevrolet and crashing into the wall in Turn 4.

Bell, who had maneuvered his Joe Gibbs Racing Toyota back to seventh, wrecked the No. 20 between Turns 3 and 4. He then was forced to retire his Rheem-sponsored Camry.

The race’s most frightening wreck occurred on Lap 168 when Cody Ware’s No. 51 Ford struck the Turn 4 wall hard, roared out of control down pit road, and slammed the wall of Bowman’s No. 48 pit stall which was fortunately vacant at the time.

Ware slowly got out of the car and had to be tended to on pit road. He was taken to the TMS infield care center and later released.

While leading the race on Lap 184, playoff points leader Chase Elliott smacked the wall after his right rear tire started to come apart. He ended up 32nd.

Playoff Standings (With two races to go before Round of 8):

This was Harvick’s 38th career NASCAR Cup Series start at Texas, the most among all drivers, past and present, in Texas’ 25-year history. Harvick led once for nine laps to increase his laps-led total at Texas to 691.

The next event on the NASCAR Cup Series schedule is the YellaWood 500 on Sunday, Oct. 2 at Talladega (Ala.) Superspeedway. It is the fifth race of the 10-race NASCAR Playoffs and the second race in the Round of 12. The YellaWood 500 starts at 2 p.m. EDT with live coverage provided by NBC and SiriusXM NASCAR Radio.