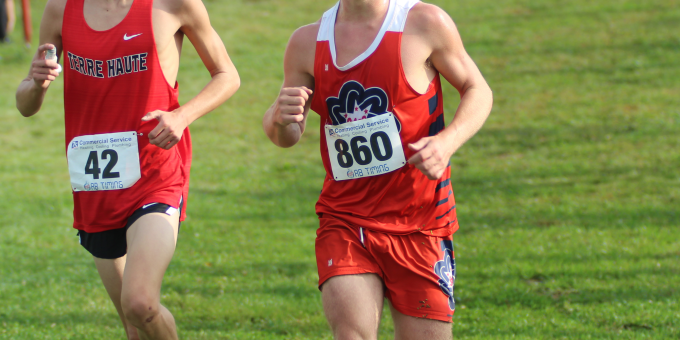 BEDFORD – The emotion of Senior Day was quivering on Emma Baumgart’s lips. Cross country is an endurance race, doubly so for a senior who has survived the grueling grind of training, racing and competing over 5,000 meters on a daily basis. And for the regular-season finale on the home course to be in the annual and prestigious Ted Fox Invitational . . . what a way to go.

Baumgart and her Bedford North Lawrence classmates bid farewell on Saturday morning during one of Southern Indiana’s premier races. The Stars were not contenders for the team title in the loaded fields, but that didn’t dampen the enthusiasm for the goodbye tour of the tough layout that has been their stomping (or in this case, treading and a little dreading) ground.

Baumgart and Mary Batz completed their last double loops of the testy track in the girls race as BNL finished 11th overall with 305 points. In the boys race, Chase Turner and Max Klein were the senior banner carriers as the Stars settled for 10th with 278 points.

Batz was a scorer for the Stars, finishing 67th overall in 24:17.07. Baumgart crossed the line in 27:20.96. They won’t remember the times in coming years, but they will recall the experience. Prancing cautiously through the mud puddle at the midpoint, churning up the hill to the finish line. Just don’t fall.

“Being part of one of the teams that runs one of the hardest courses in Southern Indiana, it’s pretty special,” Baumgart said. “That puddle always gets me. It’s tough to run through that for some people, either with how muddy or crazy it can be.”

Batz unveiled a new strategy. Rather than charging to the front and hanging on as her energy drained, she hung back in the back and shifted into overdrive during the second mile.

“It was really interesting,” Batz said. “I caught 30 people. I’ve never done that before. I usually like to start with the leaders. So it was a different mindset. And I had so much more energy the second mile. Going out fast takes a lot of energy out of you.”

“Solid times today – slower than last Saturday, but this is a much slower course so that was expected,” BNL coach Jill Vance said. “I thought Ella has a particularly good run today, but no one had a bad race. We’ve just started our taper for the sectional, so we should see some time drops.”

No.24 Northview won the team title with 40 points, while Edgewood star Clara Crain was the individual champion in 19:11.02.

“It was great to see Chase and Max run well in their final home meet as seniors,” BNL coach Nick Boyd said. “They’ve been a great asset to the team throughout their time, and they represent BNL well as cross country runners and young men.

“We saw several course personal records today from runners. We had some great running conditions out there and everyone ran experienced races, controlling their tempo from the start. This was encouraging to see across the board. It was another solid race from Jonah with a course-best time, putting him well ahead of where he was last year. Continued consistency from Alex is always great and we saw a lot of the remaining runners continue to push closer together.”

BNL will compete at Jasper on Tuesday, race in the Hoosier Hills Conference meet at Seymour on Oct. 1, then return home for the IHSAA sectional on Oct. 8.