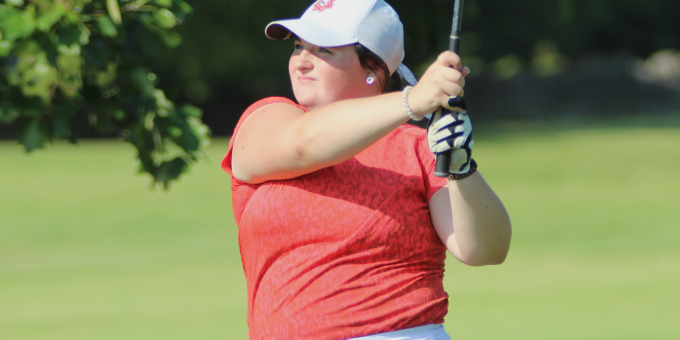 BEDFORD – If home is where the heart is, Bedford North Lawrence should love the second stage of the state tournament series.

The No.17 Stars will return to their second home – Country Oaks Golf Club – to compete in the IHSAA regional on Saturday. The top three teams, plus the top two individuals who are not members of qualifying teams, will advance to the state championship at Prairie View on Sept. 30.

While venerable Otis Park is BNL’s official home course, the regional site ranks a close second in terms of comfort and familiarity. The Stars have already played there twice – and won twice – this season, and the 5,000-yard layout fits their collective games. There’s not the fear factor that exists with other, tougher tracks. So that’s the first component in BNL’s favor as it chases the first trip to the state finals since 2018.

“Country Oaks has always been one of my favorite courses,” BNL’s Chloe McFaddin said. “It’s knowing I can go there and be confident over the ball, knowing what to hit. I know that course about as well as I know Otis, at this point.”

BNL won the 20-team Washington Invitational on Aug. 6, then returned five days later to conquer Barr-Reeve and Washington on the front nine. That doesn’t include the frequent individual trips several Stars have made to keep sharp on that layout over the course of the summer.

“All five of them are comfortable on that course, they’ve played it many times,” BNL coach Kori Johnston said. “We have the good vibes of winning there, and we put up a good score. I think we’ll put up a good number.”

The second factor is the competition. In the past, the regional has featured 18 teams. The IHSAA added a sixth regional to its state format this year, reducing the number in the regional to 15. BNL is one of only two ranked squads in the field, with No.2 Castle getting the obvious nod as favorite. But the job is a little easier with fewer teams to conquer.

And the third factor is overall experience. BNL finished 12th in last year’s regional, with four of the current top five playing in that tournament. That comes with a level of expectation as well.

“There’s still a lot of pressure for us,” Johnston said. “Castle has probably solidified the top spot, but the next two are wide open for us. We definitely have a shot at it. I think that’s a big factor. They’ve been in this position. It sets up really well for us. It’s a great opportunity.“

Most of the Stars (McFaddin, Ellie Horton, Kenley Craig and Nora Howat) were members of the middle school program the last time BNL advanced to the state level. They’ve added freshman Kinleigh Root to the lineup for this run. BNL has made the state finals eight times in program history.

“It would mean everything,” Johnston said. “That’s what we work for. To be completely honest, some of these girls didn’t think we had a shot this year. So having a legitimate chance, there’s some pressure. But I think we’re ready for it.”

“Making it out would mean the absolute world,” McFaddin said. “I’ve been dreaming about going to the state finals since I played middle school golf. It would be a great experience for everyone on the team, especially for Nora in her senior year. It would be a great way to go out.”

BNL is peaking at the perfect time. The Stars carded a season-best team score of 326 during the Hoosier Hills Conference tournament, and followed that up with 327 while winning their 10th consecutive sectional crown last week. Both of those events were at home. In reality, so is this regional.

“The last couple of weeks, we’ve gotten the bad shots out,” McFaddin said. “We’ve been playing pretty solid. I feel like we’re ready.”