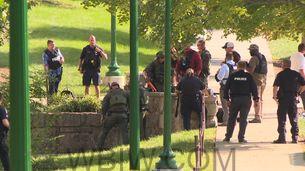 BLOOMINGTON — Bloomington, Indiana University, and Indiana State police have taken a man into custody who allegedly entered the city’s sewer system armed with a gun.

Campus police began searching near Dunn Meadow at Indiana Avenue near the drain exit. Officials believed the suspect may have entered an off-campus storm drain near East First Street and South Walnut Street.

Police from several different agencies worked from late morning until late afternoon to catch the man, who police believed was armed with a gun.

He was found and removed from the sewer at 6th Street and Indiana Avenue at Franklin Hall around 5 p.m. today, Tuesday. The man, whom police are referring to as “Eli”, was transported by an IU LifeLine ambulance to IU Bloomington Hospital for a medical evaluation before being transported to jail.

The campus and all streets are now open. Franklin Hall will remain closed until Wednesday.

More information will be released when it becomes available.