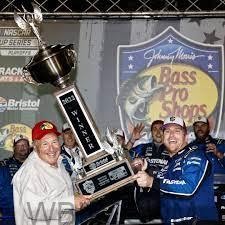 Buescher was the third straight non-Playoff driver to win a race in the Round of 16, an unprecedented occurrence.

Elliott was .458 seconds behind Buescher at the finish. William Byron came home third, followed by Christopher Bell, who posted his third straight top-five finish in the Round of 16. Kyle Larson was fifth and Ross Chastain sixth, as all five drivers immediately behind Buescher in the finishing order advanced to the Round of 12.

Denny Hamlin, Chase Briscoe, Daniel Suarez, Joey Logano, Ryan Blaney, and Alex Bowman also clinched spots in the next round, though all had serious issues during the race.

Elliott got closer to Buescher on the final two laps but ran out of time.

There were 11 caution periods for a total of 80 laps. Only 12 of the 36 drivers in the Bass Pro Shops Night Race finished on the lead lap.

Playoff Standings to Begin Round of 12:

Failed to Advance to Round of 12:

Custer earned his third top-10 of the season and his first top-10 in four career NASCAR Cup Series starts at Bristol.

This was Custer’s best finish so far this season. His previous best was a pair of ninth-place drives on July 10 at Atlanta Motor Speedway and July 31 on the road course at Indianapolis Motor Speedway.

“We had a really solid day,” said Cole Custer, driver of the No. 41 Autodesk / HaasTooling.com Ford Mustang. “The guys brought a really fast car all weekend from when we unloaded. It was fun to drive today. We executed well, stayed out of trouble, and were able to come out with a top-10. Hopefully, we can carry that momentum to next week.”

Harvick earned his 14th top-10 of the season and his 22nd top-10 in 42 career NASCAR Cup Series starts at Bristol.

Harvick’s 22 top-10s at Bristol are the most among active NASCAR Cup Series drivers. This was Harvick’s third straight top-10 at Bristol. He only has three finishes outside the top 15 at Bristol since joining SHR in 2014.

“It was pretty tough. We pitted in front of the 17 (Chris Buescher), so just kind of the way the year has gone. Just went from having a chance to lead the parade to be a part of the parade. Just difficult to pass,”  said Kevin Harvick, driver of the No. 4 Busch Light Ford Mustang.

Harvick finished 10th in Stage 2 to earn a bonus point.

Briscoe earned his 13th top-15 of the season and his second top-15 in two career NASCAR Cup Series starts at Bristol. This was Briscoe’s second straight top-15. He finished 13th in the series’ prior race at Kansas Speedway in Kansas City.

“I was kind of worried pretty early in the race that I was gonna struggle, but I was able to get fourth in that first stage and third in the second stage, and that really set us up to where I think we were right at the cutline starting that final stage,” said Chase Briscoe, driver of the No. 14 Magical Vacation Planner Ford Mustang. “We had some luck with the 18 (Kyle Busch) blowing up and a couple of guys getting wrecked and there at the end, it was unfortunate, we kind of just rode around making sure we didn’t eliminate ourselves. I’m super proud to be able to move onto the Round of 12. That’s a really big accomplishment. We’ve just got to do what we did today, not eliminate ourselves. That’s gonna be the key to this next round, especially with how many wild-card races there are. If we can go there and do that, guys are gonna keep eliminating themselves. We just have to limit our mistakes and, if we do that, we know we’ve got to have a little more speed, but if we can just limit our mistakes, it gives us a chance to move on to the next round, as well.”

Aric Almirola won the pole for the Bass Pro Shops Night race with a lap of 14.946 seconds at 128.382 mph around the .533-mile oval. It was his fourth career pole, his first of the season, and his first at Bristol. Almirola became the 52nd different NASCAR Cup Series driver to win a pole at Bristol.

Almirola led twice for 36 laps to increase his laps-led total at Bristol to 39.

A mechanical issue forced Almirola out of the race after 418 laps.